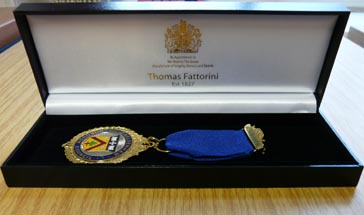 Nominations are now open for the Cheltenham Medal of Honour 2014. The medal recognises the worthwhile voluntary contribution that some of the borough’s local residents have made to their communities.

The medal will be presented during the Inauguration of the Mayor ceremony, to be held in June.

Nominations will be considered by an independent panel who will be looking for a local hero who has spent ten years or more volunteering to help improve their local community.

Last year's local hero was Maureen Jones, who was awarded the Cheltenham Medal of Honour for her services to Girlguiding.

Mayor of Cheltenham, Cllr Wendy Flynn, says: “Nominating your local hero for this medal is a great way to say thank you publicly for the hard and valuable work they have done. I’d like to urge our residents to think about people they know who deserve this award and send in their nominations right away.”

For a nomination form and to find out more about the scheme, contact Jennie Ingram, Cheltenham Medal of Honour Committee, Municipal Offices, Promenade, Cheltenham GL50 9SA, or call 01242 264108.

The Cheltenham Medal of Honour was instigated at the suggestion of former Cheltenham MP, the late Sir Charles Irving.

The closing date for nominations is Friday 21 March 2014. All nominations will be treated in the strictest confidence.