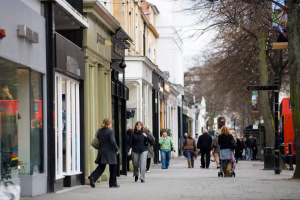 All of the council’s car parks have been busy with people taking advantage of the free parking offer from 1pm every day this week.

John Forward, manager of Regent Arcade, said that from Monday to Wednesday this week, the car park had been used by more than 300 cars more than in the same period in race week last year. That equates to a 13 per cent increase year-on-year.

‘’2014 was the first time the council introduced the free parking after 1pm and that saw a 22 per cent increase in the arcade car park over the previous year when normal charges were in place.

"More people have responded this year because the decision was made earlier and it has been very well publicised in advance.

"The offer is making a real difference. Generally retailers suffer because many local people don't want to come into town during this period but the message is getting across that it's a good time to shop."

Drink and food establishments are enjoying a profitable race week.

Kevan Blackadder, Cheltenham’s town centre manager said:  ‘’I’ve been out and about talking to businesses and they are doing really well.  Copa  bar and restaurant for example said that they have welcomed businesses from all over the world. The Bon Appetit café has been busier than usual with people coming in for breakfast and lunch.’’

Mr Blackadder added that there is also a significant boost for traders in the weeks immediately after the festival.

"So many of the hospitality staff working for the festival are local and they will have money in their pockets at the end of the week," he said. "They will be spending it next week.

"In national chains, Cheltenham stores will benefit in comparison with their colleagues elsewhere in the region because there is money to spend in the town."