Views wanted on the future of Shopmobility in Cheltenham 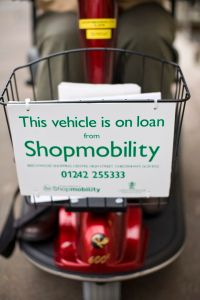 Cheltenham’s Shopmobility is moving offices and the council is taking this opportunity to review the service and the way it’s provided, as well as its future location.

People using the service are being asked to complete a simple questionnaire answering questions including whether Shopmobility should continue; how it should be run and by whom – the council, a charity, trust or private business; and what needs to be taken into consideration for the relocation.

Cllr Rowena Hay, cabinet member for healthy lifestyles, says: “Shopmobility offers a valuable lifeline to many of those who use it – helping them to live more fulfilling lives; giving them the ability to use the town centre’s shopping, leisure and cultural facilities; and enabling them to meet socially with friends. We are interested to gain feedback from people using the service on how it can be improved.”

Wilf Tomaney, townscape manager for Cheltenham Borough Council, continues: “We’d really like to hear people’s views on the service. The questionnaire takes about ten minutes to complete and will give the council an idea of what local people, users and organisations think of the service and its future provision.”

Paper copies of the questionnaire will be available from Tuesday 4 August to Tuesday 1 September at the Municipal Offices on the Promenade and at Shopmobility in the Beechwood Arcade. It can also be completed online at www.cheltenham.gov.uk/shopmobility_consultation

Findings from the survey will be reported to the council’s Cabinet in September and will be used to inform decisions on the future. For further information call the Shopmobility office on 01242 255333.

Notes:
Shopmobility will leave the Beechwood Arcade by November 2015.

The Shopmobility Service is a non-statutory service operated by Cheltenham Borough Council. In 2014-2015 the council spent about £56,000 on Shopmobility and it generated an income of just over £7,100. Between March 2011 and March 2015 use has declined from 3,156 to 2,280 visits. This makes the average cost to the council in the last year £21 per visit. Since 2011 it has been used by about 350 individuals. About a third of users came from Cheltenham, a third from the rest of Gloucestershire and a third from elsewhere.