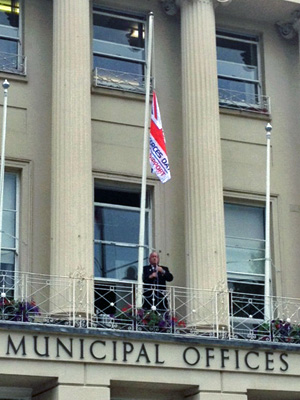 British armed forces, past, present and future will be honoured with a show of support when flags are raised across the United Kingdom, Channel Islands and Isle of Man from Tuesday 21 June 2016.

One of the specially designed flags, based on the Union flag, will be raised at the Municipal Offices at 8am on Tuesday 21 June, marking the national events leading up to Armed Forces Day on Saturday 25 June.

The Union flag will now remain at half mast until after 6pm on Monday 20 June in tribute to Jo Cox MP.

There will not be a service at the cenotaph this year due to the renovations works that are taking place around by the memorial. However the usual service will resume again next year.

Mayor Chris Ryder said: “Although we are unable to hold a special service this year at the war memorial, we are pleased to join the hundreds of other local authorities, businesses, schools and residents in raising the flag in recognition of our armed forces.’’

Branch chairman of Royal British Legion, Roy Roberts added: ‘’We agree with the council in that it feels inappropriate to hold a service whilst the restoration at the war memorial is taking place.  We are appreciative of the support that the council offers to the serving and veteran community, and will be pleased to see the flag being raised in towns and cities all over the country during this important week.’’

Armed forces day flags will also be flown where British service men and women are serving overseas, including in Afghanistan, Iraq, Cyprus, Germany, Gibraltar and the Falkland Islands.

Notes: The British Legion has been notified that there will not be a service this year and supports the decision.