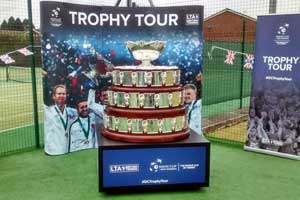 The Davis Cup by BNP Paribas Trophy will visit Montpellier Park at a special event on Saturday 20 August, as part of its tour of Great Britain and everyone is invited along.

Following Great Britain’s historic win against Belgium in the 2015 Davis Cup final, when Team GB hoisted the trophy for the first time in 79 years, the Lawn Tennis Association has decided to celebrate this momentous occasion by delivering the Davis Cup Trophy Tour across the country to thank the tennis community including players, coaches, venues and volunteers who supported the team on its incredible journey. It also wanted to inspire a new generation to pick up a racket and get involved in tennis.

When it arrives at Montpellier Park, young tennis players will feel inspired to pick up a racket and have a go at free tennis sessions with their families with the coaching team from East Glos Club. There will also be a BBQ hosted by In the Park, arts and crafts and Olympic sports to try thanks to The Cheltenham Trust play rangers.  The event, which runs from 10am until 1pm, has been designed to be fully accessible.

James Deem of the Lawn Tennis Association said: “It is fantastic to have the Davis Cup Trophy Tour come to Cheltenham, we would love to see as many people come as possible come down and see the trophy and have their photo taken, alongside it and the other events happening. If this inspires you to pick up a racket and give tennis a try, the team at ‘In the Park’ has opportunities for you in casual play and coaching.”

Councillor Flo Clucas, cabinet member for healthy lifestyles added:  “We are delighted that Cheltenham was chosen to be a part of this very special tour. It offers a once in a lifetime opportunity for families to see the trophy and celebrate Team GB’s success. I have no doubt that this will encourage people of all ages to have a go at tennis, especially since launching our ‘tennis in the park’ initiative which makes playing the game even easier.’’

Tennis in the Park, Cheltenham, means that it’s quicker and easier to have a match whenever you fancy.  For a one off charge of just £40, households can have year round access to Montpellier and Pittville Park courts with no extra costs. With an annual access code and the new online booking system, playing tennis in Cheltenham has never been easier. Alternatively, ‘pay to play’ costs just £6.40 for an hour on the court. Visit www.inthepark.co.uk/tennis for more information.

The Lawn Tennis Association (LTA) is the National Governing Body for tennis in Great Britain, responsible for developing and promoting the sport with a mission to get more people playing tennis more often.   It does this under the consumer brand of British Tennis, by working with a broad range of partners and over 25,000 volunteers, to grow the game in communities, clubs and schools.  The LTA represents the interests of over 350,000 British Tennis Members, men and women, girls and boys across the country, playing on more than 23,000 courts.  The LTA runs and supports a network of 11,500 approved tournaments for players of all ages, the corner-stones of which are five grass court pro events leading up to Wimbledon, held in Nottingham (ATP & WTA), Birmingham (WTA), Queen’s Club-London (ATP) and Eastbourne (WTA), all of which are title sponsored by Aegon, our lead Partner who is helping transform the sport in this country.  The LTA works in partnership with its charitable entity, the Tennis Foundation, to provide a tennis provision for more than 20,000 schools, disadvantaged youth as well as promoting tennis as an inclusive sport for anyone with a disability.  For further information about the LTA and British Tennis, and to review the British Tennis strategy for 2015 – 2018 visit www.lta.org.uk or follow us on Twitter @BritishTennis

After Great Britain wrote their name in history to lift the Davis Cup by BNP Paribas title for the first time in 79 years, the incredible trophy is embarking on a memorable journey of its own.

Inspiring young players along the way, the Trophy Tour, which will have special appearances from members of the Aegon GB Davis Cup Team, aims to thank the tennis community including players, coaches, venues and volunteers who have supported the team so well.

Tennis in the Park, Cheltenham

‘In The Park’ brings this exciting offering in partnership with Cheltenham Borough Council and The Lawn Tennis Association. To find out more about how to play tennis or receive coaching that is delivered by East Glos Club see In the Park’s new website: www.inthepark.co.uk/tennis