Remembrance Day and Pause to Remember 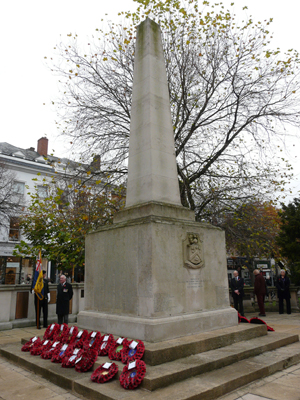 A service of remembrance

On Remembrance Day (Friday 11 November) the council is supporting The Royal British Legion in encouraging businesses, shops, offices and individuals to pause to remember at 11am. During a short service conducted by Reverend Clare Dyson, the mayor Cllr Chris Ryder will observe a two minute silence at the war memorial. Children from St Gregory’s School will be attending to join in this act of remembrance.

On Sunday 13 November, the war memorial in Cheltenham’s Long Gardens will once again be the centrepiece for the town’s service of remembrance and civic parade. The service will begin at 10.55am and a lone trumpeter will play ‘The last post’ before two minutes of silence at 11am, honoured by Cheltenham’s Mayor, Chris Ryder.

After the Reveille, the service continues with prayers, hymns and the national anthem, played by Gloucestershire Police Band.

Cllr Chris Ryder said: ‘’As first citizen I count it a privilege to be able to lead the town in this act of remembrance.’’

Cllr Ryder invites any ex-service personnel who would like to attend the services to assemble with the group at 10.20am in front of the Municipal Offices, along with members of the community.

This year, two local organisations also wanted to remember the sacrifices made.

‘Men in Sheds’ a group of retired men and veterans, with the Butterfly Garden, a local project for people of all ages dealing with disablement of any kind, have made a tribute to that time by creating a model Sopwith Camel biplane. Using 100% recycled materials from a collection of pallets and tin cans, the plane represents environmental awareness and is sympathetic to the council’s recycling aims.

The plane will be on display on the Long Gardens on Cheltenham’s Promenade on the morning of Sunday 13 November and moved shortly after the service.  It is a half scale model with a 16ft wing span.

The Sopwith Camel biplane was considered the most successful fighter aircraft of its time by those who flew it. Over 5,400 biplanes were built from 1916 and saw service in France with the Royal Flying Corps and the RNAS.

Photo opportunity: Sunday 13 November - the mayor will be in position outside the Municipal Offices at approximately 10.55am.