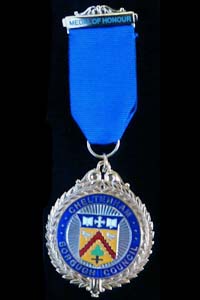 Nominations are now open for the 2018 Cheltenham Medal of Honour. The medal recognises the voluntary contribution that local residents have made to their communities.

The nominations are considered by an independent panel and all information is treated on a confidential basis. The award is presented during the Inauguration of the Mayor ceremony which will be held in May.

The 2017 Medal was awarded to Michael Donnelly for services to the community.

Mayor of Cheltenham, Cllr Klara Sudbury, says: “In Cheltenham, there are so many wonderful local people who give their time freely to help others less fortunate than themselves or who work to make our town a better place to live. The medal of honour is an important way of recognising those who have volunteered their time and energy to make a real difference in our communities.

“If you know a person who has volunteered in this way for at least ten years continuous service, please consider thanking them by nominating them for this annual award.”

The closing date for 2018 nominations is Friday 16 March.

Notes: The award was instigated at the suggestion of the late Sir Charles Irving.

The period of contribution to the local community should not be less than ten years of continuous service.