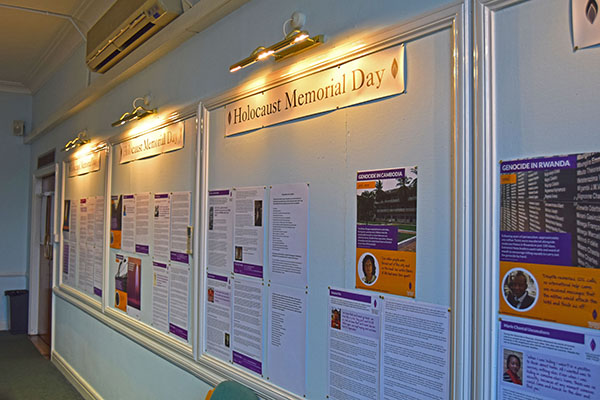 An exhibition is on display for three days in the Pittville Room at the Municipal Offices, following the 'Stand Together' theme of this year's Holocaust Memorial Day.

Monday 27 January 2020 marked Holocaust Memorial Day (HMD), the 75th anniversary of the liberation of Auschwitz-Birkenau and the the 25th anniversary of the Genocide in Bosnia. In commemoration of this landmark anniversary individuals, organisations and community groups came together for an Act of Remembrance in the council chambers at the Municipal Offices.

This year’s HMD theme was Stand Together. Genocidal regimes throughout history have deliberately fractured societies by marginalising certain groups. Now more than ever, we need to stand together with others in our communities in order to stop division and the spread of hatred in our society.

As well as attending the evening event, groups and individuals were invited to participate by creating artworks featuring a memorial flame to mark 75 years since the end of the Holocaust. The flames which Year 8 Pittville School students created are on display in the Pittville meeting room exhibition. Please feel free to visit these, as well as visiting the HMD exhibition which will be on display in the Pittville room until Thursday.

The exhibition in the Pittville Room follows this year’s chosen theme, ‘Stand Together’. As well as exploring the theme vision, the ten stages of genocide and the background to the Holocaust, Nazi Persecution and four subsequent genocides, it focuses on the lives of a number of individuals that illustrate the theme. The exhibition also includes several of the prayers and poems that were read during the Act of Remembrance, and copies of the paintings by Jewish children in the camp-ghetto of Terezin (Theresienstadt).

The exhibition will remain on display in the Pittville Room for three days following the Act of Remembrance and may be visited between 1pm-2pm and 4pm-5pm on Tuesday 28, Wednesday 29 and Thursday 30 January 2020.

“Don’t be content in your life just to do no wrong, be prepared every day to try and do some good” - Sir Nicholas Winton, who rescued 669 children from Nazi-occupied Europe