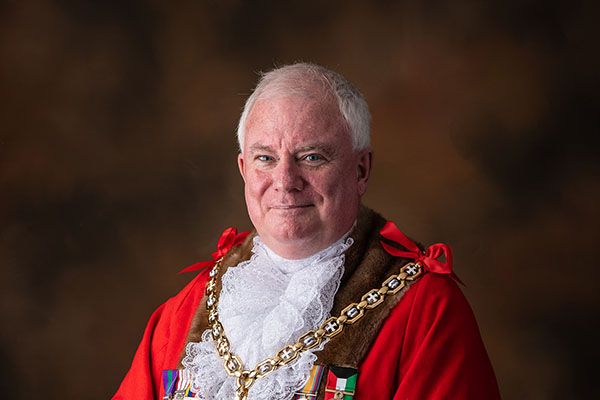 The annual inauguration of the mayor was held at Cheltenham Town Hall at 6.30 pm yesterday (Monday 17 May) and the ceremonial event is available on the council’s YouTube channel.

The mayor chairs the council and represents the borough at many local business and charity events throughout the year. This year, the new mayor has decided to focus his fundraising efforts towards: Friends of the Cheltenham Samaritans.

Local fundraising group Friends of the Cheltenham Samaritans, supports the local branch of the Samaritans in Cheltenham. The group also run fundraising events such as, The Cheltenham Craft Beer and Cider Festival as well as supporting many other Cheltenham based community groups.

Councillor Steve Harvey said: “Covid 19 does not discriminate on the grounds of race, ethnicity, gender, colour or sexual orientation. Neither do the Samaritans, so my choice of Mayors Charity for the Civic year 21-22 I hope reflects my personal views on inclusivity.”

The Medal of Honour recipient for 2021 is Dawn Eccles, a local resident who has worked tirelessly for the community to help local children.

Dawn was nominated for her selfless and energetic work as a local schools volunteer and governor as well as local volunteer coordinator for the Aston Project and membership secretary and treasurer for Cheltenham Saracens Youth RFC.

To recognise the extraordinary effort in response to the coronavirus pandemic, the former mayor, Cllr Roger Whyborn developed the Mayor’s Community Awards for exceptional service, celebrating the efforts and contributions made by individuals, community groups, businesses and young people to Cheltenham.

The award winners are:

For further details about the awards contact Jennie Ingram, personal assistant to the mayor on 01242 264108 or jennie.ingram@cheltenham.gov.uk

The mayor making ceremony is available to watch through the council’s YouTube channel - www.youtube.com/cheltenhamborough