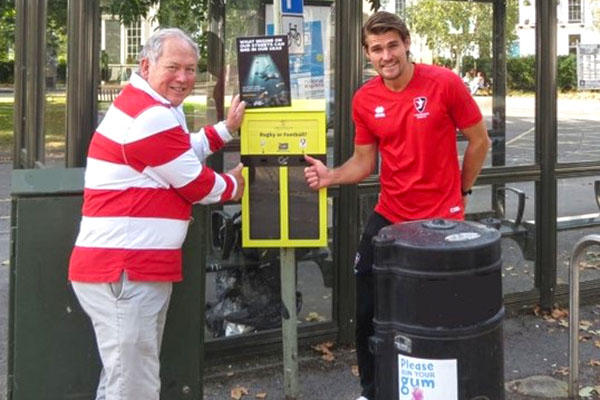 Cheltenham Borough Council are asking residents and visitors to help tackle dropped cigarette butts and chewing gum around the borough.

Today (Monday 4 October), in partnership with Keep Britain Tidy, and with support from Cheltenham Town Football Club (CTFC), the council are launching the new #BinTheButt campaign to tackle the issue of cigarette-related litter.

Allison Ogden-Newton OBE, chief executive of environmental charity Keep Britain Tidy, said: “Cigarette butts, which contain both plastic and chemicals that are highly toxic to both wildlife and marine life, are littered more than anything else in this country and each year millions of them are dropped.

“We need smokers to understand that though each butt is small in size, the problem they create when added together is not. We are delighted that Cheltenham Borough Council is launching #BinTheButt to encourage smokers to do the right thing.”

Cllr Iain Dobie, cabinet member for waste, recycling and street services at Cheltenham Borough Council, continued: “If you’ve ever stopped and looked along the street, gutters and paths you can often see cigarette butts and dropped chewing gum and sadly Cheltenham is no exception, despite the best efforts of our street cleansing teams.

“We are launching the #BinTheButt and #BinYourGum campaigns to encourage everyone to help keep our town clean and tidy as well as keep litter out of street drains which flow into the rivers and the sea.

“As well as launching the campaigns, we have separately installed two ‘ballot bins’ to help collect cigarette ends. These two new ballot bins have been installed in hotspot areas to encourage smokers to bin their cigarette butts. The yellow bins have proved to be successful in other areas by asking smokers to dispose of their ends in voting columns – and on ours, we’re asking whether people prefer rugby or football.

“These two bins have been installed in litter hotspots in the town centre, one on the high street outside John Lewis and another at Royal Well bus station.”

The second Cheltenham campaign #BinYourGum also kicks off today to encourage people to dispose of their chewing gum correctly. It is part of a national campaign to tackle gum littering, developed by Behaviour Change in partnership with Mars Wrigley. With the help from Cheltenham Town FC, the council is working to help tackle the issue of chewing gum being thrown on the floor.

Cheltenham Town Football Club player, Charlie Raglan, said: “Cheltenham is a great town and as players who love the town we’re asking everyone to think before they throw and #BinYourGum and #BinTheButt. Let’s keep the streets of Cheltenham clean and tidy for everyone.’’

Photo: single use only