On 10, 11 & 12 August, our collection teams will be starting rounds at 5.30am instead of 7am, due to the forecast of extreme heat. Please put bins & boxes out the night before your collection.

Find out more about the heatwave bin collections
Skip to content 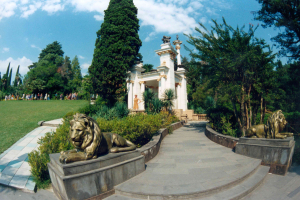 The Sochi International Film Festival Awards (SIFFA) is coming to Cheltenham in 2022. This is in celebration of the rescheduled 60th anniversary of our friendship link with Sochi Russia, which was established in 1959.

Cheltenham Twinning Association is delighted that the UK part of the event will be held in Cheltenham in February 2022 following on from a very successful and spectacular five day event in Sochi in November. SIFFA is now in its 6th year and is represented at many major film festivals throughout the year, including Cannes. It has huge support from Russian cultural organisations across the country.

We are seeking a small number of key sponsors, in the Cheltenham area, to ensure this event is a huge success. We need your help to provide a unique awards festival, which will include a range of Russian films, workshops, musical events, displays of Russian art works and a Gala evening and award ceremony. Various Russian artists and performers will also be attending.

Sponsorship packages of £500, £300 and £150 are available, each includes having your business logo in the programme and on the press wall and tickets to the gala evening as well as to a number of other events, depending on the sponsorship package chosen. Smaller individual donations would also be very much appreciated.

Cllr Diggory Seacome, Chair of Cheltenham Twinning Association, said: ”We are delighted to be working in partnership with our Russian twin town, Sochi, in the promotion of its Film Festival in February 2022, postponed twice already due to the Covid pandemic. A great programme of Russian themed events is being planned in the New Year in conjunction with the Chapel Arts Gallery, culminating in the gala evening at the Parabola Arts Centre, Bayshill Road on Saturday 12th February. In the weeks leading up to the presentation of the awards there will also be a series of concerts, given by Russian artists. We do hope that many people will be able to enjoy this feast of Russian Culture by coming along or giving a small donation to the hosting of such a prestigious event!!”

Cllr Victoria Atherstone, Cabinet Member for Culture, Wellbeing and Business, said: “It’s not often we can host such an exciting international film festival awards in our town and it’s a huge honour to be able to welcome and celebrate our 60th anniversary in February 2022 with our friends in Sochi Russia.

“With such an action-packed schedule of Russian cultural entertainment there are so many opportunities for residents and visitors of Cheltenham to get involved. We are very fortunate to have an array of talented media professionals and businesses here in our town with many graduating from our very own University of Gloucestershire, celebrated nationally for its media studies. This makes the Sochi Film Festival Awards even more relevant for our town.”

“This is an extremely important international cultural event and Cheltenham’s Twinning Association have produced a fantastic range of sponsorship opportunities that will ensure this celebration is a huge success for us all. I’d like to invite those who want to help create even more international media and film links for our budding media professionals and established businesses with Sochi Russia to get in touch. This is an opportunity not to be missed!”

Donations of any amount can be made online at: Cheltenham.gov.uk/twinning-payments

For more information and to discuss sponsorship packages and donations please contact twinning@cheltenham.gov.uk

Past events SIFFA has run in Sochi and London can be seen at: http://www.siffarussuk.com/