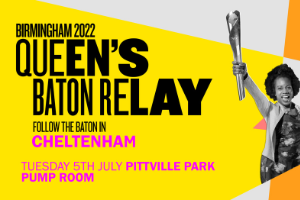 Tomorrow, Tuesday 5 July Cheltenham will welcome the Queen's Baton Relay. Fun event begins from 4pm - the baton will travel through Pittville Park with a celebration at Pittville Pump Room.

Cheltenham is gearing up to welcome the Queen's Baton Relay to the town tomorrow Tuesday, 5 July. As part of the 16th official Queen’s Baton Relay, the Baton has travelled approximately 90,000 miles across the Commonwealth. Its arrival in Cheltenham will mark the 18th stop on the England leg of the journey.

Cllr Rowena Hay leader of Cheltenham Borough Council said: “I am delighted that The Queen's Baton will be coming to Cheltenham on its journey to the commonwealth games. The relay so far has been inspiring to see and we are honoured to be a part of it. Our chosen Batonbearers are all members of the local community and I am excited to see the town come out to support them on this historic day.”

Louis Eperjesi, chair of the board of trustees of The Cheltenham Trust, said: “Pittville Pump Room has hosted, and witnessed, many significant moments in history since it opened in 1830, almost 200 years ago. The Cheltenham Trust is delighted to be welcoming the Queen’s Baton Relay to the pump room and to be supporting this latest historic event by hosting free entertainment and activities for the community as a build-up to the baton’s arrival.

“We’re inviting the community to join us at the pump room and park to come and cheer the baton as the team of Batonbearers carry it to the official reception in front of the pump room. The fun starts at 4pm and we’re looking forward to welcoming everyone for this exciting moment in history.”

During its visit to Cheltenham, the Baton will be taken up by six Batonbearers, inspiring individuals who are all striving for change within their community.

Marian Venn had a passion for swimming from an early age and has run a hugely successful swim school for over 40 years. Over the years she has taught hundreds of children and adults to swim while raising large sums of money for charity through sponsored swims. Having only retired last year at the sprightly age of 81, she continues to swim daily at the pool in her apartment.

Carole Billington-Wood competed for Great Britain as an elite triathlete in her 20s, before going on to work for British Triathlon as Director of Development. For the last 17 years, Carole has worked at the NSPCC Child Protection in the Sport Unit, supporting sports organisations to improve their safeguarding and keep children taking part in sport safe. Over the past few months, Carole has had a personal challenge following a diagnosis of Lymphoma, but this has not stopped her dedication and work to keeping athletes safe.

Virginia Pawlyn took up running late in life, pushing herself to run her first marathon to celebrate her 70th birthday.  At 81, with 14 marathons under her belt, she continues to challenge herself; coming first for the over 80s in the 2021 London marathon, which she ran in support of Parkinson's. She continues to help others in many ways, including LifeLines befriending people on death row through letter writing.

For the past 13 years, David Fahey has dedicated his time to raising money for local charities via fundraisers, golf match auctions, swimathons, football matches and most recently by running the London marathon as a guide runner. In total, he has raised more than £130,000 for charitable organisations such as The British Heart Foundation, the Neonatal Unit at Gloucestershire Royal, The Meningitis Trust, Guide Dogs for the Blind and the Sue Ryder hospice in Leckhampton.

Having recently celebrated 42 years in the RAF, Steve Hawkins has been an avid devotee to Macmillan Cancer Support since completing the London Marathon in 2013. In 2020, Steve completed his volunteer training online with Macmillan and was ‘Lead Volunteer’ at the Bristol Half Marathon in 2021. Inspired by the 26-mile Macmillan Mighty Hike challenges that were postponed due to COVID, Steve took on his own ‘Solo 26 Mile Mighty Hike’ around Cheltenham in 2021, finishing his challenge in a little under 7 hours.

Ophelia Neville spent her summers as a teenager volunteering over 200 hours to local sports programmes, earning her a sports leadership award in the process. She has inspired many with her tenacity, maintaining her passion for sport whilst witnessing her dad suffer through years of terminal illness, painful treatment and untimely death during her final year at University. Last year she pioneered a free weekly netball group for teenage girls aged 11-18 in the local community. Since then the group has grown from two to thirty girls with four leaders.

For more information on the Queen’s Baton Relay, visit www.birmingham2022.com/qbr

Tuesday, 5 July - The build-up begins with music with DJ Rob McElvanney at 4pm, and children’s fun activities, followed by live music from popular singer and pianist Jon Clare from 4.30pm. The Heritage Deco café will be open and there will be pop-up food and drink stands including barbecue until 8pm.

Updates can be on Visit Cheltenham's Queen's Baton Relay page.

You can also download the Queen's Baton Relay route map, or view the image below. 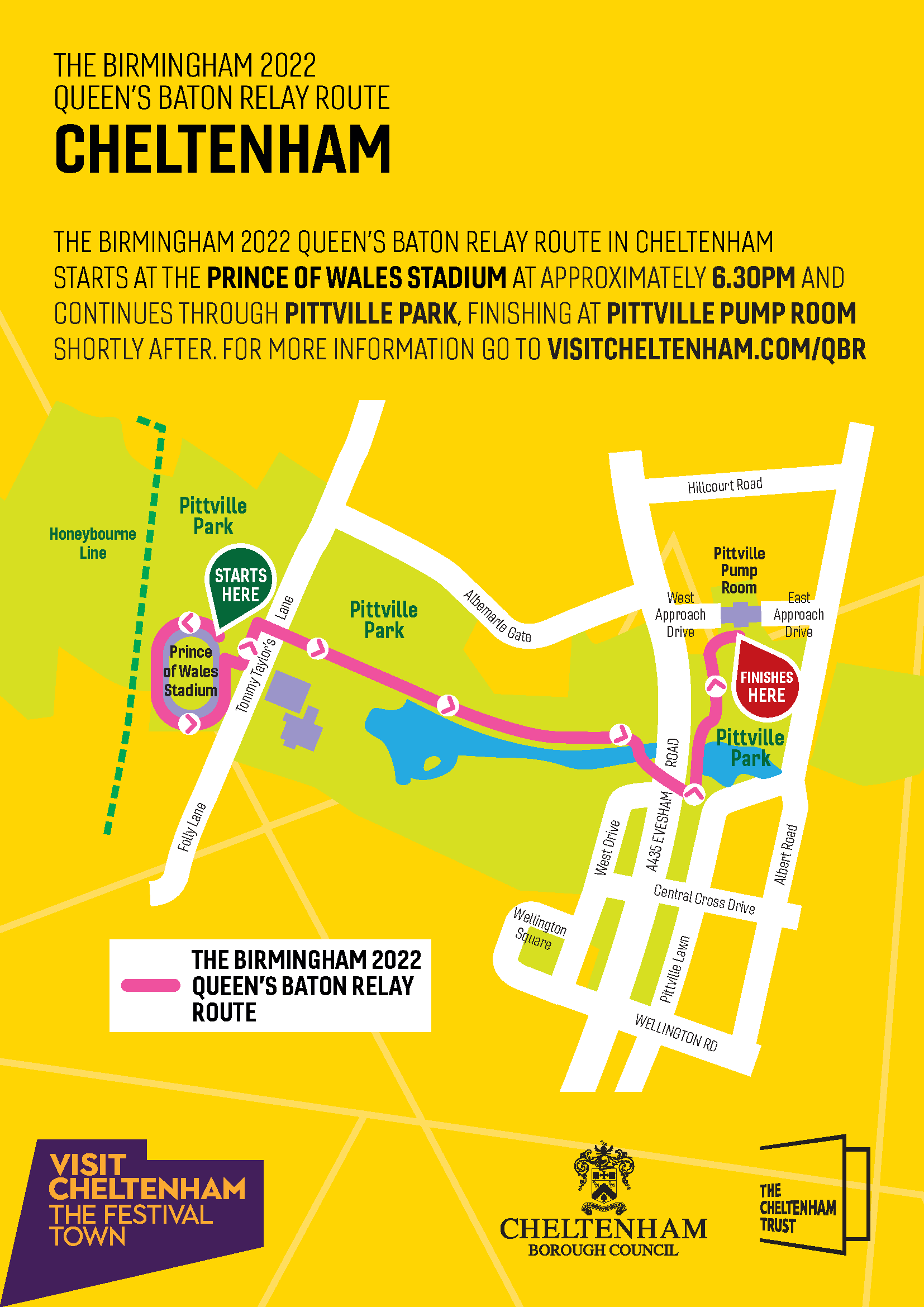