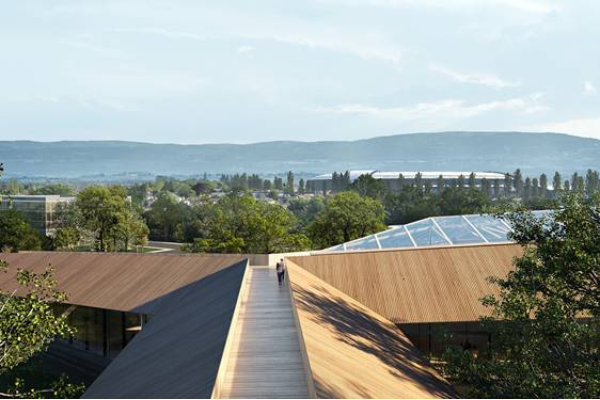 Cheltenham Borough Council has signed the contract with HBD X Factory to develop the first phase of the £1 billion Golden Valley Development.

Today, Tuesday 12 July 2022, Cheltenham Borough Council has announced that HBD X Factory has now been formally appointed as the development partner to assist in delivering the first phase of the £1bn Golden Valley Development (GVD) located in Cheltenham at the heart of the UK’s Cyber community.

Since the July 2021 preferred developer partner announcement, the GVD team alongside HBD X Factory, have been focused on achieving contract close which has now been adopted by the Council.

The overall Golden Valley Development, spanning over 200 ha, will provide 3,700 new homes, almost 12,000 new jobs and 2m sq. ft. of commercial space with the National Cyber Innovation Centre at the heart of this thriving campus for cyber and digital technologies. GVD forms part of the UK Government’s Levelling Up plans and features within the National Cyber Strategy as key ‘to supporting the growth of cyber-related technology businesses’.

Following the announcement, HBD X Factory is undertaking a variety of design exercises in advance of a public consultation programme, prior to planning submission, including a masterplan framework for the site and detailed proposals for the Innovation Centre.

Commenting about the official appointment, Leader of Cheltenham Borough Council, Councillor Rowena Hay said: “This is the largest development that Cheltenham Borough Council have ever embarked upon and shows the scale of our ambitions for the town. Its significance will be far reaching and deliver benefits out to the county, the wider region, nationally and beyond. It will also bring education opportunities, career paths and homes in to residents of Cheltenham now and into the future.”

Tim Atkins, Project Lead and Managing Director for Place and Growth at Cheltenham Borough Council, lead the appointment negotiations: “The Golden Valley Development is all about collaboration. Bringing together the cyber community with education; transport solutions with Cheltenham Zero goals and high-value jobs with affordable housing. It’s fitting therefore to have signed a partnership agreement with HBD X Factory who each bring their diverse skills together for this pioneering project. The delivery of the National Cyber Innovation Centre will be a magnet for international investment, to drive regeneration and support the UK in its mission to be the safest place to live and do online business.”

The developer search was led by Gordon Isgrove, Avison Young, who launched the tender process at an international level on behalf of Cheltenham Borough Council.

Sustainability will be a key element of the huge new project, which will target Net Zero Carbon. Smart technology coupled with innovative design and MMC will cut energy output and carbon impact across both the residential and commercial elements of the development.

Adam Brady, Executive Director at HBD, said: “HBD X Factory was formed to deliver world leading districts; the Golden Valley Development is one of the UK’s most exciting - and nationally significant - projects and we look forward to working alongside the council to make the vision a reality.”

Jeremy Bamberg, Co-Founder of Factory, said: “This is a major milestone. For HBD X Factory, the Cheltenham Borough Council – and the UK. It demonstrates how the property sector, government and the technology community can join forces to promote innovation, economic growth and national security. We look forward to progressing this project together with our partners and the local community.”

The project has received funding from local and national government bodies, including £22 million investment from GFirst LEP to improve transport infrastructure surrounding the Golden Valley Development site. Also, the Council has a further £180 million funding available for the delivery of high-quality homes. £37.5 million was used by Cheltenham Borough Council to fund the purchase of the land alongside £249 million of Government investment being delivered by Gloucestershire County Council.

The project’s success to-date has been founded on strong collaborative working. The site includes the direct involvement of three local authorities Cheltenham and Tewkesbury Borough Councils and Gloucestershire County Council, as well as the strong support of the GFirst LEP.