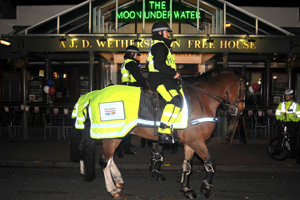 Race week round up

Cheltenham Borough Council and Gloucestershire Police have been working in partnership this week to keep Cheltenham safe and clean as an extra 50,000+ descended on the town for Cheltenham Festival.

Every night council officers from the public protection team and police officers carried out inspections of licensed premises to ensure they were not breaching conditions.

Conditions could include the number of people allowed in the club or the time they are allowed to stay open until. During race week is adult entertainment, this also has restrictions.

Two years ago, clubs and pubs had very little restrictions placed upon them because at the time the law was not designed to deal with adult entertainment. Licensed premises did not have to inform authorities of planned adult entertainment which encouraged explicit adverts appearing in the town.

Last year Cheltenham Borough Council’s members adopted new legislation to gain more control over the activities of sexual entertainment venues. The new law allows licensed premises only 24 consecutive hours of adult entertainment in a month for 11 months of the year unless they had appropriate licence in place.

The council is now able target its inspections as clubs and pubs can only hold one night of this activity during race week. It also has more powers to deal with premises if they are found to be breaching this regulation, including closure.

Adult entertainment is a lawful activity; however, restrictions apply such as no contact and the supervision of activity by security staff to guarantee the safety of those involved.

This year most clubs have complied, however, on Wednesday night a premises was voluntary closed by the owners following a breach of the legislation.

Louis Krog, Senior Licensing Officer," The Council has adopted legislation that enables it to regulate sexual entertainment in Cheltenham.

There is an exemption in the new legislation that permits any premises to offer sexual entertainment for up to 24 consecutive hours a month and for no more than eleven months a year."

Trevor Gladding, Community Protection Manager added, "Every year at Cheltenham Festival, we work with the police to ensure the town remains a safe place for residents and the thousands of visitors that attend the event and enforce relevant legislation in a fair but firm manner at all times.”

Chief Inspector Emma Davies, of Gloucestershire Constabulary, said: "Our priority is that everyone who visits the town has a safe and enjoyable time. Officers are out every night to ensure that any sign of trouble is dealt with swiftly and effectively before it escalates. As a result there have been very few arrests or incidents that have required a large police response so far. We are working with Cheltenham Borough Council to conduct nightly licensing checks at venues throughout race week. These checks are being carried out by uniformed as well as plain clothes officers. So far as a result of these checks one club was found to be clearly operating outside of their license agreement and was asked to close, which it did. Further action is being taken against the licensees.

We have an excellent working relationship with those involved in the night-time economy here who understand their responsibilities under their licenses. If anyone is aware or has information about illegal activity in the town we would urge them to call police on 101 alternatively you can remain anonymous and call Crimestoppers on 0800 555 111."

Other activities during the week which the council will be stepping up checks with are street traders and taxi and private hire drivers. Unauthorised street traders can take advantage of residents and visitors who may end up buying illegal or fake goods. An unlicensed taxi not only takes trade away from regular Cheltenham taxis, but can also be unsafe for passengers.

The council’s cleansing team also has the unpleasant job of cleaning the mess caused by an extra 50,000+ people in the town.