From the Middle Ages to the 19th century 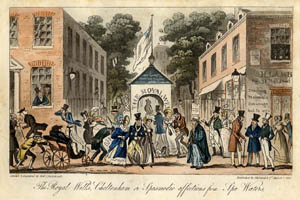 Cheltenham began as an Anglo-Saxon village over 1200 years ago. In 1226 it became a market town, which was the basis of its economy until the 18th century, when its medicinal waters were discovered in a field to the south of the town, where Cheltenham Ladies' College now stands. These were regarded as beneficial for a whole range of illnesses and by the late 18th century the town was one of England's leading spas.

In 1788 King George III spent five weeks at Cheltenham, drinking the waters for his health's sake. His visit 'set the seal' on the town's popularity and during the following years the number of visitors and residents increased dramatically. Between 1700 and 1800 its population rose from 1500 to over 3000 and by 1850 it was the largest town in Gloucestershire, with a population of more than 35,000. Among famous visitors were members of the English and Continental Royal families, including Princess (later Queen) Victoria, the Duke of Wellington, and the novelists Jane Austen and Lord Byron.

Visitors to the town would drink the waters at either the original spa or one of the rival spas that were established in the early 19th century, such as Montpellier and Pittville. Several of the spas had tree-lined walks, rides and gardens in which the visitors could 'promenade', often with a band of musicians in attendance. Regular public breakfasts, gala fetes, firework displays and other entertainments were held at the larger spas. Visitors could also attend balls, assemblies and concerts at the Assembly Rooms, plays at the Theatre Royal and horse races at the racecourse. They could also shop for souvenirs along the High Street and, from the 1820s, in the fashionable new shopping areas of Montpellier and the Promenade. 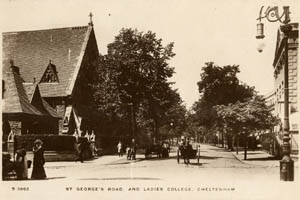 Cheltenham's heyday as a spa lasted from about 1790 to 1840 and these years saw the building of the town's many fine Regency terraces, crescents and villas. By 1840 it had also become a popular residential town, particularly for military families, many of whom had served in the Empire. It also gained a reputation for the quality of preaching in its many churches and chapels and for its schools and colleges, which encouraged still more families to settle in the town. The earliest of these schools was the Cheltenham Proprietary College for Boys, opened in 1841; the Ladies' College opened 13 years later.