Taskforce looks back over 3 years of achievements 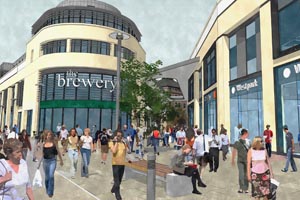 The working group responsible for breathing new life into Cheltenham’s town centre is reflecting on its achievements on its third anniversary.

The Cheltenham Development Taskforce is the driving force behind a number of emerging developments including North Place/Portland Street, the Brewery and the Midwinter site.

Cheltenham Borough Council’s cabinet gave the go-ahead in December 2009 for an independent advisory board to turn Cheltenham’s long term ambitions into reality. Chaired by Graham Garbutt, formerly chief executive of Gloucester City Council, head of Government Office for the West Midlands, and Chief executive of the Countryside Agency and Commission for Rural Communities, the group of volunteers and highly experienced specialists represent the private, public and voluntary sectors.

In the past three years, the task force has promoted some radical and welcomed changes to the town centre and surrounding areas.

The transformation of North Place and Portland Street car parks has moved a step closer with a planning application set to go to committee next month. Supporting a brief set out by the council and in response to public feedback, the scheme will offer affordable housing, a multi-storey car park, a public square, a food store and a bus station. The development will be a welcomed addition to the other town centre upgrades which have all made good progress in recent months and will continue to be a priority in 2013. These include: changes to the Brewery complex and surrounding area, which secured planning consent in July 2012 and will dramatically improve connections between the High Street and Lower High Street to the West and Strand to the East; a new entrance into the Regent Arcade – a project which had stalled until the taskforce was established; and improved paving on the Promenade, with further works planned for the coming year.

In addition, working with the county council, the group secured a Department for Transport funding bid which will help promote sustainable development; 2012 saw a traffic light switch-off trial along St Margaret’s Road which was seemingly well received by many and the task force will be working closely with the county to launch a public consultation about the wider transport plan aimed to support future sustainable development later this year.

Elsewhere, development of the Midwinter site by Bloor Homes, which had stalled as a result of the recession is now on site with phase one and aims to deliver 172 new homes in total with 40 per cent being affordable.

Graham Garbutt, chair of Cheltenham Development Taskforce, said: ‘’Establishing any new body to promote development and regeneration can be challenging, but in the face of the deepest recession faced for several decades, the Task Force has clearly created an impact and continues to make solid progress.

“Task Force members have contributed enormously as have, staff led by Jeremy Williamson. The support of the founding partners has been essential to the progress achieved so far.”

Jeremy Williamson, managing director, added: “Development and regeneration are long term activities but 2013 will hopefully see major schemes on site and this in turn boosts market confidence. The objective remains to support the economic vibrancy of the town whilst also maintaining those elements that make Cheltenham unique.