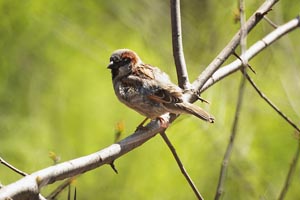 A year long survey recording the variety of birds in two of Cheltenham’s parks has revealed over 50 species in Pittville Park and 35 species in Hatherley Park.

The survey, conducted by volunteers from Cheltenham Bird Club, was carried out as part of ongoing surveys to record wildlife species which are found in the towns green open spaces.

Some of the species recorded in Pittville included a number of woodland species Treecreepers, Nuthatch, Robin, Wren and Great Spotted Woodpecker. The common species that visit many of our gardens have featured strongly in the survey with Blackbirds, House Sparrows, finches and three members of the tit family appearing regularly. Fourteen species of water birds have been recorded on site; the number of individual species fluctuates across the year and so do the number of gulls recorded across the survey period.

Thirty five species of birds were recorded in Hatherley Park. Garden bird species feature highly in the survey as well as the water species.

Janice Payne, community ranger, said: “The volunteers gave up their time to walk around both Pittville and Hatherley Park recording bird species and their numbers. It’s good to see such a variety of bird species in these parks. Both these parks offer a variety of habitats which are appealing to birds from lakes to woodland and grassland.”

Alan Richards, from Cheltenham Bird Club, added: “Some of these results have surprised me. I never expected to see Bullfinch or Whitethroat in our parks. One day I hope to find a Kingfisher!”