Work being carried out on iconic tree in Montpellier Gardens 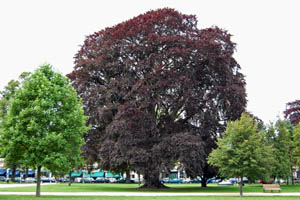 The iconic Copper Beech tree in Montpellier Gardens is having significant work carried out on it in order to keep the tree in a safe condition.

The tree, which has been in situ for the past 200 years has unfortunately fallen prey to a serious fungus - Ganoderma adspersum. This can be seen by the large mushroom-shaped decay mushrooms on the eastern and northern sides of the trunk and the various other small fungi elsewhere.

Cheltenham Borough Council has been closely monitoring the health of the tree with the assistance of an Arboriculture Association approved consultant for nine years. They have been reducing the risk to the public by occasionally removing a proportion of the canopy so as to reduce crown weight as well as the overall area of the crown.

Due to the trees increasing advancing decay, it is now intended that in order to retain the tree in an acceptably safe condition further significant work is now required. This will involve the removal of 10 to 15 per cent (2-3 metres) of the trees overall height and spread as well as erecting a low fence to discourage the public from going underneath the canopy.

Chris Chavasse, senior tress officer, said: “The removal of these fungal brackets will not stop the spread of internal decay, and now the tree has started to shed limbs.

“The continuing spread of decay will mean that the tree is increasingly likely to shed more limbs and as such it is likely that the Council will have to remove the tree at the start of 2016. Replacement trees are already in situ but it is hoped that further large tree planting will also eventually replace the lost amenity that this fine beech currently provides.”

Councillor Roger Whyborn, cabinet member for sustainability, added: “We are saddened that this iconic tree is diseased. It has been a landmark of Montpellier Gardens for hundreds of years. We are doing all we can to prolong its life but it is likely that the tree will have to be removed in a few years time as the decay spreads as public safety is our main priority.”