Imagine putting your life in a bag 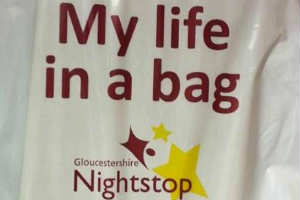 What if you were thrown out on the street with no money but only what you could carry in a plastic bag?

The Gloucestershire Nightstop launched a campaign called ‘My life in a bag’ and asked what you would take if you left home and had to put everything you needed for 24 hours in just one carrier bag.

Councillor Barbara Driver and Councillor Peter Jeffries took part in the campaign to understand what it feels like to live with very few possessions so as they can appreciate what many young homeless people across the county go through.

She found the experience difficult but rewarding as it really brought home what it means to have nothing.

Councillor Barbara Driver, Ward member for Lansdown, said: “Doing my job as a councillor I should understand what some peoples’ lives are like. Being told what it is like is no where near as informative as trying it for yourself even if it is only for 24 hours.

“The hardest thing was not being able to put the kettle on for a cup of tea, just drinking water unless someone offered you a hot drink. I love my toast and butter but if you are homeless you can’t easily have hot food as you have no way of cooking it. The one item I wish I had packed was hand wipes. At least I knew it was only for 24 hours to imagine it on going not knowing when it would end must be terrible.”

He found his experience very beneficial in understanding the issues homeless people face.

He said: “In my early 20’s I was in-between accommodation for a few months, so it brought back a lot of memories. It’s not just about the homeless people we see on the streets it’s also about the hidden homeless who find themselves moving from one place to the next.

“Throughout the day I did get to talk to a lot of people about what I was doing which enabled me to provide a voice for the young people in the county who are affected by homelessness and talk about the invaluable work of Gloucester Nightstop.

“The experience also showed me how kind and considerate people can be as I was often offered refreshments to help get through the day.”

To find out more about Gloucester Nightstop visit their website.