Councillors sleeping out to raise awareness of youth homelessness 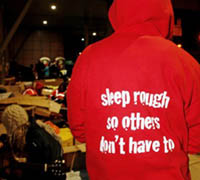 Councillor Barbara Driver and Councillor Peter Jeffries will be joining other YMCA supporters in Cheltenham and across England in a mass sleep-out event between 1 and 3 March 2013.

The councillors are going to spend a night sleeping rough to highlight the issue of youth homelessness and to help raise money to change the lives of vulnerable young people in the local community.

The Sleep Easy event has been organised by the YMCA and will be taking place on 1 March 2013 in the car park of the YMCA Sports and Community Activity Centre.

Councillor Peter Jeffries, Cabinet member for Housing, Safety and Communities, added: “The money that is raised will go straight to Cheltenham YMCA to help them provide extra rooms for young homeless people here in Cheltenham. We really want to help young people in the town build a future so it’s important to take part in events like this that raise awareness and funds to help them.”

Councillor Barbara Driver, Ward member for Lansdown, said: “I’m looking forward to taking part in this event. It will certainly be challenging but it’s vital that I do my bit to highlight the issue of youth homelessness and raise vital funds to support the work of the YMCA.”

Cheltenham YMCA’s Sleep Easy event will be on the night of Friday 1 March 2013 between 7.30pm and 7.30am at the YMCA Sport & Community Activity Centre on Princess Elizabeth Way. Participants will have the chance to join in team games, competitions and link up with others around the country through Facebook and Twitter.

To find out more information about YMCA Sleep Easy or to sign up to the event, visit their website.