Major improvements to pavements on the Promenade 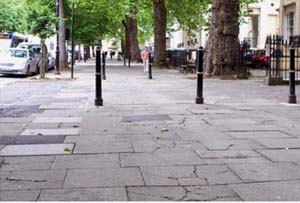 Gloucestershire County Council is set to carry out major resurfacing work on the pavements between Crescent Terrace and St George’s Road on Monday 8 April.

The scheme, which is the third phase of work to significantly improve the road, is estimated to cost around £300,000 and is due to finish in August. The work is joint funded by the county council and Cheltenham Borough Council.

New stone slabs will be laid and specialist flexible surfacing used to match resurfacing work carried out on the other side of the road last year.

For the safety of local people and contract staff, the footway will be closed in sections during the works. Although disruption will be kept to a minimum, the existing taxi rank and market will be temporarily relocated further along the road.

Local highways manager Chris Riley said: “We’ve been working very closely with Cheltenham Borough Council on the designs and co-ordinating with their licensing teams to ensure any inconvenience is kept to a minimum.

“The seasonal markets that are held regularly will continue in an alternative location on the Promenade and, though there should be little disruption, we would ask people for their patience while this work is completed.”

Jeremy Williamson, managing director of Cheltenham Development Task Force, said: “These works are a very welcome next stage in our wider improvement programme for the town centre and demonstrate the benefit of collaborative working.”

Anyone with any concerns should call Gloucestershire Highways on 08000 514 514.

This third phase of improvements follows on from work to improve footways on the Promenade between the Quadrangle and Queen’s Hotel in 2011 and between Imperial Square and Ormond Place last year.