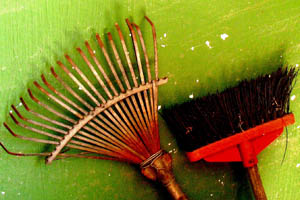 As weeds grow they not only become unsightly, but may also make our pavements and roads more dangerous by making them slippery or causing the condition of the surface to deteriorate.

When weeds grow along kerbs and channels, they can disrupt the drainage, cause blockages in gullies and obscure the kerb. The aim of the county council's weed control programme is to eradicate weeds using a spot treatment method. This is done by applying a pesticide to the weed which ensures maximum effect with minimum risk to operators, water supplies and the public.

During 2013, a contractor will undertake two applications of this weed control pesticide, the first in late spring and the second in early Autumn. The first application will take place across the borough during May and June. The pesticide will be applied to any active weed growth that is found on hard surfaces such as kerbs and road channels, central reservations and roundabouts, pavements and around street furniture such as benches, lighting columns and signs. It will also be applied in certain grassed areas but this is limited to areas immediately around trees and non-living obstacles, and also the very edge of grassed areas where it is not possible to mow right up to the edge.

Any enquiries, should be directed to customer services by phoning 01242 262626 or email the cleansing team.