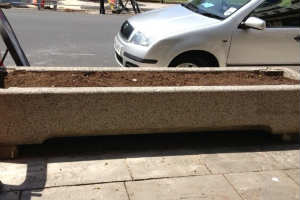 The restoration of Pittville Gates is nearing completion and is transforming the appearance of the prominent corner on which they stand.

They are going to be one of Cheltenham’s landmarks again.

The restoration plan includes putting back a horse trough in front of the gateway in place of the one that stood there for many years. The original trough was installed in 1883 by the Cheltenham Ladies’ Society for the Protection of Animals, lead by Mrs Mary Champion. Sadly this trough disappeared, probably in the 1970s, so a replacement is needed.

It is proposed that the granite trough in the Promenade, at the southern end of the pedestrianised area outside the RBS building, should be moved to the gateway.  However whilst it is believed Cheltenham Borough Council own this trough and has always provided the bedding plants for it, there is no record of the council’s ownership.