Historic railings to be reinstated at Imperial Gardens 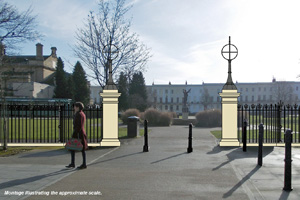 Plans to reinstate historic railings to Imperial Gardens are underway after proposals to implement the project have been given the green light.

Friends of Imperial Square , Heritage and Conservation (FISHAC), who are leading the project, will be working in partnership with Cheltenham Borough Council to bring the railings back to their former glory.

The £500,000 project will be paid for by FISHAC’s fundraising efforts and Cheltenham Borough Council will then use the funds to begin construction.

Reintroducing the railings will pay tribute to the park’s long history within the town centre.

Cllr Whyborn, cabinet member for sustainability, says, “This project is a significant and exciting development for the town centre of Cheltenham .

“Imperial Gardens are well used and well loved by the town’s people and visitors. The gardens have evolved in appearance and usage over time, in which not only the railings, but also the Winter Gardens, have come and gone, until we have reached the present day layout.

“The council’s commitment to the town hall and gardens, as iconic parts of our built and green environments is an ongoing one.”

Bob Keevil, Chairman of Trustees, FISHAC, says, “Re-introducing railings would build on the long heritage of the gardens and enhance the Regency heritage which attracts so much tourism and business to Cheltenham .

“It also complements the reinstatement of the railings alongside Montpellier Gardens , the restoration of Pittville Gates and other private initiatives to restore railings and architectural features around the town."