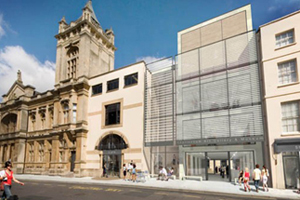 ‘The Wilson’ has been approved by cabinet as the new name for Cheltenham Art Gallery and Museum.

The decision to rebrand the art gallery and museum was made following an extensive £6m renovation project to the existing building, which will be unveiled on 5 October.

Staff, volunteers and external stakeholders took part in workshops to talk about how the art gallery and museum is perceived now, and how they would like it to be perceived in the future. A creative consultancy was then asked to develop a brand.

‘The Wilson’, ‘CMAG’ and ‘51’ - were highlighted as possible options that could be worked up within a strong brand. The three options were opened up for public feedback which was considered by cabinet before making the decision.

‘The Wilson’ refers to Edward Wilson, one of Cheltenham’s most famous native sons known for accompanying Robert Scott on his expedition to the Antarctic and for his talent for ‘exploration’ art.

Cabinet member for Sport and Culture, Rowena Hay, said, ”Of the three options, ‘The Wilson’ was recommended as a name with strong local links and would fit perfectly with our new ethos. We want to position the art gallery and museum as a place to ‘explore and discover’ art and history.”

Cllr Hay went on to say, “Encompassing all that this building has to offer in one name was never going to be an easy task. In this new build alone the exhibition space is four times bigger than we had before, there will be the guild shop and a café, space for corporate events, the ‘friends and young people’ rooms, the open archives, a learning centre, a study room and, finally, a new home for out tourism team. There will be an arts and crafts collection, costumes, Cheltenham’s heritage, archaeology, polar exploration and lots more.”

“This is the most significant development project that Cheltenham has had for a good many years and I am extremely excited about the opening on 5 October and would encourage everybody to visit as soon as they can.”

The logo accompanying the new name is inspired by the window grid on the new building and by the modular structure of the rooms and spaces within it. It will carry the description, ‘Cheltenham Art Gallery and Museum’ underneath or alongside it.

The bold, but simple design will mean that the logo will stand out on displays and can be used in a range of colours.

The black and white signage will also compliment the steel and glass features and the modern ‘look and feel’ of the building.