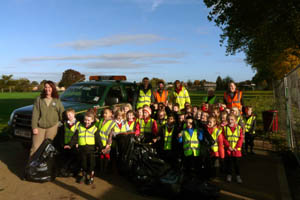 Year one children from Rowanfield Infant School took part in a litter pick during a local area walk around King George Fifth Playing Field, as part of their project 'Litter Bugs'.

The litter pick was a great success. The children hunted down any litter they could find along the route, which included Alstone Lane, Brooklyn Road and King George V Playing Fields. After an hour of collecting litter along the route, the children returned with big bags of rubbish, including crisp packets, cans and even a broken umbrella.

As they went round in small groups led by teachers, the children tallied each piece of litter they collected.

Cheltenham Borough Council’s community ranger, Janice Peacey helped the pupils by providing litter picking equipment and arranged for the bags of litter to be taken away by staff from the council’s waste and recycling service provider, Ubico.

Speaking at the event, Janice said: "We’re really pleased that we could help with the ‘Litter Bug’ project. It is great to get children involved in issues of recycling and rubbish from an early age. Hopefully, this will remember the ‘litterbugs’ activities as they grow up and will continue to do what they can to take care of the environment."

The project involved the children being taught about rubbish and recycling and how this is linked with looking after the environment. Other things that the children have been doing include recycled paper making, composting workshops, storytelling and learning about different materials.

Jill Proctor, year one leader, says: “We started the learning with a shock - our classrooms were full of rubbish - where did it come from? What happens to it? The children were shocked and it started their questioning. The children were very excited when the refuse lorry came to school to empty our bins. It is such an important message that they realise the impact of dropping litter in the local area."

Cabinet member for sustainability, Roger Whyborn said, “The message about rubbish and recycling is really getting though if the children are getting excited about it. The Council relies on communities and volunteers to work with us to help improve the landscape, but more importantly, to raise awareness of the impact litter has on the environment. Well done and thank you to Year 1 at Rowanfield Infant School.”

Notes: Photos are available on request