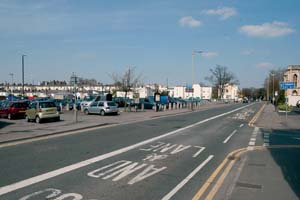 From Monday 20 January, Portland Street car park and a strip of North Place car park (fronting North Place) will no longer be managed as a public car park by Cheltenham Borough Council.

On this date the council signs will be removed and the land will subsequently be transferred to new owners, Skanska.

The land will be owned by Skanska, and they will decide how they use this land but it is understood that they intend to continue to use the land and operate it as a private car park until any development takes place.

This is a significant step in seeing the transformation of North Place and Portland Street car parks. Supporting a brief set out by the council and in response to public comments, the scheme will offer affordable housing, a multi-storey car park, a public square and a food store.

Councillor Andrew McKinlay, cabinet member for built environment, added: “This forms part of a much bigger picture of development in Cheltenham. The development promises to breathe new life into this town centre location by transforming a long neglected area.

“The development will create new jobs and much needed housing, including a significant element which will be affordable as well as providing the impetus for many other town centre improvements to begin.”

The council will still manage 12 town centre car parks, to see the locations of these car parks visit the council’s website.