Are you going to the Sochi 2014 Olympics? 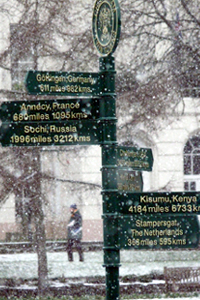 Sochi 2014 Winter Olympics will be held in Sochi Russia from 7 February until 23 February 2014.

Are you lucky enough to be going to Sochi, one of Cheltenham’s twin towns? If so, Cheltenham Borough Council and Cheltenham’s Twinning Association would like to hear from you and offer you the opportunity to meet with them for a celebratory send-off.

Annette Wight, twinning officer, said: “There will be no official representatives from Cheltenham Borough Council attending the Sochi Winter Games so we want to hear if any Cheltenham residents or businesses are attending and bring them all together to celebrate this unique occasion with Cheltenham Twinning Association. We’re hoping anyone attending will be able to take some pictures so the memories can be brought back to Cheltenham.”

Garth Barnes, chairman of the Twinning Association, added: “It’s great the Winter Olympics are taking place in one of our twin towns. Cheltenham has been twinned with Sochi since the 1950s when there was a strong drive towards forming twinning links with towns and cities in the former allied countries. The city of Sochi was chosen by the Soviet Embassy as a potential twin for Cheltenham, as both Cheltenham and Sochi are spa towns.

“To make the trip extra memorable we want to offer any local residents or businesses attending the Winter Games the opportunity to have a celebratory send-off. We do hope people will take us up on the offer and get in touch.”

It’s not only residents heading off to the Sochi Winter Olympics – businesses are also attending. Local firm, PKL Group based in Stoke Orchard, is currently working in Sochi providing temporary catering facilities at the Olympic venues, very much the same as they did for the Vancouver Winter Olympics and the London Olympics. Many Cheltenham residents are employed at this company which supplies kitchen catering equipment for major international events around the world.

The celebratory send-off will take place week beginning 3 February in the Mayor’s Parlour at the Municipal Offices, if you are going to Sochi 2014 Olympics and would like to attend please contact Annette Wight on 01242 264311. We’d still like to hear from you if you are attending the Winter Games but are not able to attend the send-off – please do still get in touch with Annette.

To find out more about Cheltenham’s Twinning Association visit their website.

Notes: Photographers are welcome to attend the celebratory send-off taking place week beginning 3 February in the Mayor’s Parlour at the Municipal Offices. If you would like to attend please call the communications team on 01242 775050 who will confirm the date and time nearer the time.