The Return of Rodin’s Kiss 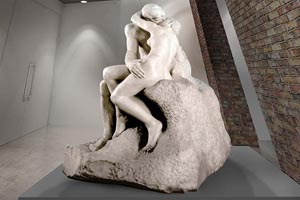 The internationally renowned sculpture is on display in Cheltenham from 14 February to 10 August 2014.

To celebrate the 100 year centenary of Rodin’s residence in Cheltenham, Rodin’s internationally renowned sculpture The Kiss makes its return to Cheltenham’s Art Gallery and Museum, The Wilson, 80 years later. His world famous sculpture first came to the art gallery and museum in 1933; 2014 will see its return at the same time as the 'Embrace Cheltenham' campaign.

Now part of the collections at Tate, London; the iconic symbol of youthful love will be on loan and displayed at The Wilson between 14 February and 10 August 2014. The sculpture shows the adulterous lovers Paolo Malatesta and Francesca da Rimini, who were slain by Francesca’s outraged husband. They appear in Dante’s Inferno, which describes how their passion grew as they read the story of Lancelot and Guinevere together. The book can be seen in the hands of Paolo.

Undoubtedly one of the most famous artists of his time Auguste Rodin is still considered among the most important sculptors of the 20th century. Having lived and studied in France, Rodin worked predominantly in bronze but depicted two lovers in The Kiss as part of his larger work The Gates of Hell.

Jane Lillystone, museum, arts and tourism manager, says: “We are so excited to see The Kiss returning to Cheltenham. It is particularly apt that the now internationally acclaimed sculpture will be back on display at the Gallery in 2014, as 2014 will mark the passing of 100 years since Auguste Rodin himself was in Cheltenham.

“In 1914, Rodin accompanied his friend and biographer, Judith Cladel on a visit to her sister; his signature in the visitor book marks his visit to the Gallery.

“It is thought that Rodin came here to escape Paris in the face of German advance. Rodin stayed at Sussex House (no 54) a guest house near Pittville Gates, run by a widow named Mrs Gandy due to his relationship with Judith Cladel, his friend and biographer who came to Cheltenham to visit her sister. It is likely that he was in Cheltenham in September and October of 1914, although local legend has exaggerated this to one year in some accounts.”

The Kiss will be on display at The Wilson from 14 February until 10 August 2014. Alongside the display will be an exhibition exploring the embrace by a variety of well know artists and an exciting programme of events for adults and families as well as Rodin inspired menus in The Wilson café. Entry to The Wilson is free.

Note to editors:
- Embrace: an exhibition of work by artists from the 20th century onwards is on display 18 January - 21 April 2014.
- Embrace Cheltenham campaign will run throughout February 2014.
- A range of Rodin inspired menus will be sale in the Gallery Café.
- The Wilson shop has an exciting partnership with Musée Rodin in Paris and has a selection of official merchandise.