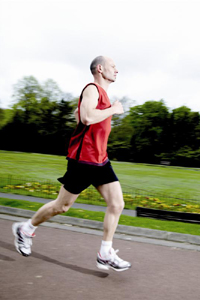 3-2-1, a Run England project that gives a range of marked out running or jogging routes across the country, is coming to Cheltenham.

The run routes for both Pittville Park and the Honeybourne Line have been planned with individual runners of all abilities in mind. Running groups will also be able to use them as their purpose is mainly to set out distances and encourage healthy walking and running for everyone.

Rowena Tassell, healthy lifestyles development officer at Cheltenham Borough Council, says: “Running has become a very popular past-time and so we set up a working group last year to look into a new running route for Pittville Park and the Honeybourne Line using the 3-2-1 Run England project.

“The new scheme is a great way of encouraging people to use the park and Honeybourne Line and get active outdoors. It compliments our existing initiatives - Run England running groups and parkrun - in a more informal and adhoc way.

“We hope that this will appeal to lots of different people of different ages and abilities from keen runners to new runners, wheelchair users to mums’ and their buggies, to help motivate people to lead a more active and healthy lifestyle.”

The route for Pittville Park includes a 1km, 2km and 3km route starting and finishing at the same point and linking both sides of the Evesham Road.

The Run England 321 standard markers require posts at certain junctions to define the route and distances. Custom-made markers will be fixed to the existing path surfaces to reduce the visual impact in the park. The routes have also been kept to hard surfaces to provide a facility accessible by all.

Cllr Rowena Hay, cabinet member for sport and culture, added: “This is a great way of providing a meaningful challenge to help more people to get running when it best suits them. It provides a great opportunity to explore Pittville Park and the Honeybourne Line whilst getting fit at the same time and best of all it’s free!”

The set up cost is under £1,000, and is jointly split between the council’s parks and healthy lifestyles budgets.

Photo opportunity – a photo opportunity is available between 8.30am and 8.45am on Saturday 8 March. Please meet in the park just behind leisure@cheltenham on the Tommy Taylor’s Lane side by the parkrun gazebo.

Photographers must be prompt as the run will start at 9am. Please call the communications team on 01242 775050 if you would like to attend.

Run England 3-2-1 routes are permanently marked running routes created by a range of local providers. You can search for local routes via the Run England website and the information on each route is provided by the organisation who provided the route. Runners use the listed 3 2 1 routes at their own risk.