Urban meadows being created in green open spaces across Cheltenham 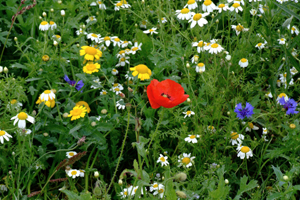 Cheltenham Borough Council has embarked on a project to create a number of colourful urban meadows across the town.

The urban meadows will improve the biodiversity of green open space and provide attractive displays throughout the summer and beyond.

Some of the sites where urban meadows are being created include Pittville Park - the area adjacent to Evesham road next to the tennis courts, Montpellier Gardens, the Honeybourne Line by Queens Road, St.Peter’s Park, just off Princess Elizabeth Way, Cox’s Meadow, Hatherley Park and Royal Well bus station. The grass has been treated in these areas, and people may already have noticed the grass turning yellow. In the coming weeks they will be cultivated and seeded.

Two seed mixes are being used; one is a traditional cornfield mix and the other is a special mix developed to commemorate the beginning of WW1 and includes Flanders poppies, Bishops Flower, Red Flax and Cosmos.

Janice Peacey, community ranger, said: “Cheltenham has many green open spaces and by increasing the number of urban flower meadows across the town we will be helping the wildlife; from insects through to birds as well as providing visually appealing views for the parks users and visitors.”

Councillor Roger Whyborn, cabinet member for sustainability, added: “The new urban meadows will provide pollen and nectar for a good range of insects as well as look beautiful for people using these open spaces in Cheltenham.”