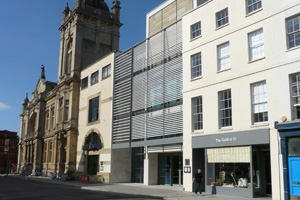 The Wilson, Cheltenham’s art gallery and museum, continues to go from strength to strength and has now been formally recognised for its elegant and striking new building.

Designed by architects Berman Guedes Stretton, The Wilson has won a Cheltenham Civic Society Award and is nominated for both the 2014 RIBA South West and the 2014 RICS South West Awards.

This was one of most significant development projects that Cheltenham has had for many years, costing in the region of £6.3 million. Four new floors house a gallery dedicated to The Wilson’s extensive fine art collection, space to discover more about local heroes, including the great Edward Wilson (one of Scott’s key men on his 1912 expedition to Antarctica), a re-interpreted arts and crafts gallery (showing the world-renowned designated collection), and two superb temporary exhibition galleries – for showing national and international touring shows, special highlights from the collections and fun shows for families.

The new building is light and spacious with a focus on providing practical and versatile areas within which a variety of work can be displayed. Since reopening in October 2013, over 100,000 visitors have been through the doors at The Wilson, and many have commented on how successful they feel the rebuild has been, and importantly, how well they feel the collections are interpreted and displayed.

The reopening was celebrated with the arrival in February of Rodin’s famous ‘The Kiss’ sculpture which took pride of place in the new Atrium area of the ground floor. Cheltenham has been extremely fortunate to have The Kiss (on display until 10 August 2014) and its arrival was heralded with an extensive marketing campaign. The posters for the campaign, designed by creative consultancy ASHA, have recently been given the Silver Award for poster design by Graphis.

Jane Lillystone, Museum, art and tourism manager said: “The rebuild of The Wilson has been very rewarding. Since the doors reopened last year, we’ve welcomed over 100,000 visitors to the new spaces. We’re very proud to have been nominated for these awards, and delighted that the work of Berman Guedes Stretton is being recognised in this way.”

•    The Wilson, Cheltenham's art gallery and museum re-opened to the public on 5 October 2013, after a major new build costing in the region of £6.3 million. Designed by architects Berman Guedes Stretton, the new building offers something for everybody, whether they are local to the area, or coming to Cheltenham for the first time. The Wilson houses an extensive fine art collection, a re-interpreted arts and crafts gallery (showing the world-renowned designated collection), and includes two superb temporary exhibition galleries – for showing national and international touring shows, special highlights from the collections and fun shows for families.

•    The Wilson is also the new home for the town’s tourism services - with the re-location of Cheltenham’s Tourist Information Centre to the art gallery and museum. The Wilson operates as part of Cheltenham Borough Council.