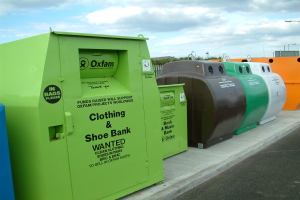 Cheltenham Borough Council will be conducting a trial starting on 2 June which will run over the summer to establish if it can expand the range of plastics that can be recycled at its recycling sites.

The recycling 'mixed plastics' will take place at 12 of its most popular ‘Bring Bank’ recycling sites around the town.

Because of its light and bulky nature, recycling plastics are more expensive than recycling other types of materials, but the council recognises that there is a clear public demand for this service.

The plastic being trialled is ‘mixed plastics’. This refers to items such as; yoghurt pots, margarine tubs, ice cream tubs, ready-meal trays and plastic fruit punnets.

However, this does not include any black-coloured plastic, plastic bags or cling film (or any other kind of film).

Plastic bottles have always been part of the core group of materials that are recycled by the council but other ‘mixed plastic’ previously went to landfill. But from 2 June 2014, a trial, running a minimum of three-months, will begin to determine if these types of plastics can also be recycled at Cheltenham recycling sites in the future.

Residents who are keen to recycle this type of plastic – and help the result of the trial – will be able to take them to any of the following recycling sites from 2 June 2014:

If the results of the trial are positive and cost effective, then it is likely that this service will be implemented permanently.

Research, which has been completed in planning this initiative, has highlighted four other sites (listed below) around the town that are particularly under-used and are, therefore, extremely costly for the council to run.

In order for collection crews to manage the expanded plastics recycling service, if mixed plastics are permanently introduced then it is planned that these sites will close. This will free-up valuable resources which can then be used on servicing the more well-used sites, especially with the expected increase in demand as a result of the potential expansion of plastics recycling.

Cllr Roger Whyborn, cabinet member for sustainability, said: “Every tonne of waste which isn’t landfilled saves the taxpayer £80/tonne so we are very pleased to be able to introduce this step forward, especially as it is in response to clear public demand.

“Cheltenham has always striven to be in the forefront of moves to divert recyclable waste away from landfill and so, as well as expanding the range of plastics recycled from ‘bring bank sites’, we are also researching the possibility of collecting these kinds of mixed plastics from the kerbside. At present, council budgets are limited, so this initiative is something which we hope to be able to implement in the future when it is more financially viable. However, residents will continue to be able to recycle plastic bottles at the kerbside. ”