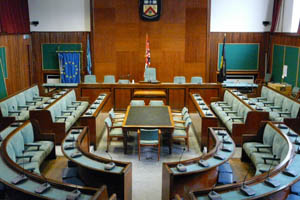 The partnership aims to transform the delivery of council services and deliver more efficiency savings and protect public services.

Senior politicians and officers from Cheltenham, Cotswold, Forest of Dean and West Oxfordshire District Councils outlined their plans to the Minister in a one hour session that was also attended by the Minister’s special advisors.

The plans for the partnership known as ‘2020 Vision for Joint working’ are being considered by each council’s Cabinet and will be aired at Cheltenham Borough Council’s cabinet on 24 June – see link to papers which will be published this afternoon.

Rt Hon Francis Maude MP said of the plans: “The 2020 vision for joint working is a fantastic model for the areas affected. In the face of changing financial times, it’s good to see the four councils take a further step in sharing services, but at the same time keeping their identity as individual authorities with their own democratic accountability.”

Councillor Steve Jordan, Leader of Cheltenham Borough Council and chair of today’s meeting said: “The visit was recognition of the innovative work the four councils have been doing. We are pleased to have government funding to support the 2020 vision and Mr Maude was able to offer useful advice and ideas to assist us going forward.”


If approved, the four authorities would establish a jointly-owned local authority company to provide the services required by each individual council.

The move is expected to save in excess of £55m over 10 years, and it comes in response to continued financial pressures that local authorities face.

The proposition enables the councils to protect valued frontline services, whilst they will each remain as independent authorities with their own elected councillors representing local people.

The Partnership was awarded a £500,000 Transformation Grant by central government in April to look to strengthen the shared working arrangement. This will assist work on the new proposed arrangements.