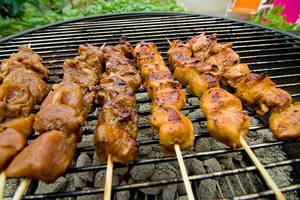 Campylobacter is the most common cause of food poisoning in the UK and can affect up to 250,000 people a year, that's nearly enough to fill London's Olympic stadium three times over. Food Safety Week 2014 will be focusing on Campylobacter and how it can be controlled. Cheltenham Borough Council urges local people to follow advice from the Food Standards Agency throughout Food Safety Week.

Campylobacter is most commonly found on raw poultry. It has no smell or taste and you can’t see it on food, but it can have a very unpleasant effect if digested. It can require hospital treatment and at its worst, it can kill you.

The Food Standards agency is spearheading this campaign to bring together the whole food chain to tackle the problem. Farmers and producers will be asked to work harder to reduce the amount of bacteria on their raw poultry. Consumers are being asked not to wash chicken before cooking it, as this can transfer bacteria onto hands, arms and onto kitchen work surfaces.

Cheltenham Borough council, other national authorities, supermarkets and key partners will be working together to make sure people know how to stay safe. For more information, visit www.food.gov.uk/chicken.

Bob Martin, head of foodborne disease strategy at the Food Standards Agency said: “This is a serious problem and we are calling on the whole industry to do act together to tackle Campylobacter. People in Cheltenham can do their part by handling and preparing chicken with extra care – don’t wash raw chicken, cook it properly and enjoy it safely.”

Sarah Clark, public and environmental health team leader at Cheltenham Borough Council said: “I’m sure many people across Cheltenham have been affected by food poisoning at some point, whether they have contracted the illness themselves or they know of someone who has. Thankfully, if you handle and prepare food safely, then food poisoning such as Campylobacter is usually easily preventable. I would encourage Cheltenham residents to look at the Food Standards Agency website at www.food.gov.uk/actnow, to find tips on how to prepare food (including chicken) safely.”

Rowena Hay, cabinet member for healthy lifestyles added: “It’s important that the people of Cheltenham and business that provide food really take notice of the valuable advice the FSA are offering throughout the week. Poisoning is usually preventable as long as the preparation process is safe.”