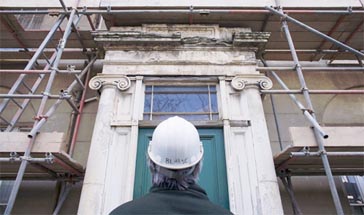 Cheltenham Borough Council has won a court case, bringing a successful prosecution against the owner of a Grade II listed building for unauthorised works and has had a Compulsory Purchase Order (CPO) confirmed, to bring a long term vacant property back into use.

Nina Salerno, owner of 24 Lansdown Parade, Cheltenham, carried out unauthorised works, including removing and replacing the staircase and three fireplaces, along with further internal works.

The works carried out were deemed to affect the property’s character as a building of special, architectural or historic interest. Due to the severity of the works that had taken place, the case went before Cheltenham Magistrates Court on 24 February 2014, where the defendant pleaded not guilty to the charges brought against her. A trial date was set for 16 June 2014.

After taking professional advice from legal and heritage experts, the defendant changed her plea on 5 June 2014. The matter went before Cheltenham Magistrates Court on 16 June 2014 where the defendant was found guilty of the charges brought against her and ordered to pay the Council’s full legal costs within 14 days of the trial.

The owner has now instructed a heritage expert to work with the council in resolving the issues at the property.

Mike Redman, director of environmental and regulatory services, said: “Prosecutions are only used by this authority in the most serious cases, usually where a satisfactory resolution cannot be achieved by working with the owner of a property. Our enforcement team is committed to protecting the heritage of our beautiful town for future generations and in particular, its large number of listed buildings. We will continue to carry out inspections and respond to complaints about unauthorised changes to listed buildings, using our statutory powers when necessary.”

In the second case, a long term empty home in Golden Miller Road, Cheltenham, was having a detrimental impact on the neighbourhood due to a lack of maintenance, resulting in a state of disrepair.

Housing and Planning legislation was used to successfully bring 8 Golden Miller Road back into use, enabling it to be renovated and reoccupied and improving the local area.

Nigel Fletcher, the owner, had been contacted many times and was eventually prosecuted under the Town and Country Planning Act 1990 for lack of compliance with a notice requiring works to improve the property.  Due to his inaction and lack of co-operation, the Council decided to use its compulsory purchase powers.

Cllr Andrew McKinlay, cabinet member for development and safety, said: “Our enforcement team is committed to tackling long term vacant properties and has a programme in place, which if all else fails, leads to compulsory purchase of these would-be homes, securing improvements and onward sale for reoccupation. At a time of unprecedented demand for homes and pressure to build on greenfield sites, we are not prepared to see existing dwellings being left empty for years on end.”

Notes:
In England alone there are just over 635,000 empty homes and around 216,000 of those have been empty for over 6 months.  Bringing empty properties back into use is a sustainable way of increasing the local supply of housing and reducing the negative impact that neglected empty homes can have on communities.

CPOs are used as a last resort to tackle the very worst long term vacant properties which are often a nuisance for local communities, where all other attempts to encourage owners to improve and reoccupy them as homes have failed.

The CPO on 8 Golden Miller Road was confirmed by the Secretary of State for Communities and Local Government in June 2014 and the property has now been sold. The Council will be working with the new owner to ensure that the property is brought back into use and improved to the benefit of the local neighbourhood.