Get your turkey ready for ‘National Defrost Your Turkey Day’ 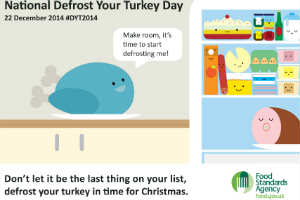 This day will prompt Christmas cooks to start thinking of the defrosting process in plenty of time and avoid getting caught out. A typical large turkey can take two days to defrost.

Only one in four people get it right by defrosting their turkey in the fridge. The Food Standard Agency is concerned that many risk getting an unwelcome gift of food poisoning this Christmas. Incorrect thawing provides a platform for bacteria such as campylobacter to spread, leaving you with a turkey dinner that looks and tastes delicious but contains a hidden risk that can’t be seen, tasted or smelled, but can ruin your new year.

From late December 2013 to the start of January 2014 more than 3,000 cases of campylobacter were confirmed in England and Wales – an indication that more care needs to be given to the preparation, storage and consumption of turkey in the home during the festive period.

‘We all love our turkey dinner at Christmas and this year should be no exception. It’s the little things you do that can make a real difference. So if you make sure that your turkey is defrosted safely and in good time, you can enjoy your meal happily and safely.’ Said Kevin Hargin, Head of Foodborne Disease at the Food Standards Agency

Bernadette Reed, environmental health officer at Cheltenham Borough Council said: “I’m sure many people across Cheltenham have been affected by food poisoning at some point, whether they have contracted the illness themselves or they know of someone who has. It’s something you certainly want to avoid during the Christmas period so you can enjoy all the festivities and indulgence that takes place. Thankfully, by following the advice from the FSA you can handle and prepare food safely, then food poisoning such as Campylobacter is usually easily preventable.”

The FSA advises that when preparing your turkey from frozen you should:

- Follow the retailer’s recommended defrosting time. The size of your turkey will determine how long it needs to be defrosted for (a large 11kg turkey can take up to two days to defrost).

- Defrost your turkey in the fridge if possible or somewhere cool. Cold temperature slows the growth of germs on food and will keep it safe and fresh.

- Cover the turkey whilst defrosting, leave in the packaging or put it in a container to hold any thawing juices, and place it at the bottom of the fridge to avoid cross-contamination.

- Defrost thoroughly, as otherwise your turkey may not cook evenly and harmful bacteria could survive the cooking process.

- Raw turkey should always be put in the bottom of the fridge until ready to use. Leaving on the kitchen counter at room temperature could increase your risk of food poisoning.

Campylobacter bacteria are commonly found on poultry meat. Between 50% and 80% of cases of campylobacter food poisoning in the UK and other EU countries can be attributed to poultry sources, mostly to raw poultry meat.1

If you want your Christmas dinner to be remembered for the right reasons, follow the FSA’s advice on the recommended safe practices when preparing, cooking and storing turkey.

Find out more about the FSA’s top tips on their website.

1. Scientific Opinion on Quantification of the risk posed by broiler meat to human campylobacteriosis in the EU (adopted 9 December 2009) http://www.efsa.europa.eu/en/scdocs/scdoc/1437.htm