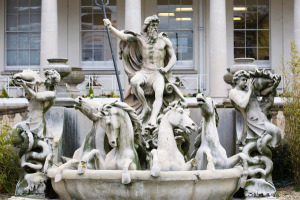 Neptune's trident has finally been found

‘’Please can you return this to Cheltenham Borough Council, or the police. We were drunk and there was no harm meant. We’re sincerely sorry.’’  Neptune’s trident has finally been found and returned to the borough council, along with an apologetic note and a costly repair bill.

Stroud police contacted the council yesterday (Monday 5 January) to say the trident had been recovered from a garden in Painswick and was safe with them. An officer from the council collected it from the police and it is being stored in the Municipal Offices until it can be repaired and put back where it belongs, on the fountain.

The trident, which Neptune holds in his hand atop the famous fountain in the Promenade, was first noticed missing on the morning of 21 December 2014 and after being returned to the fountain by a member of the public, was taken again sometime during the same weekend. The council issued a press release asking the public to help in finding the missing trident.

Garrie Dowling, senior property surveyor, said: “The fountain is one of Cheltenham’s most iconic landmarks so we are delighted the trident has been found safe. We’d like to thank everyone for their help in assisting with its safe return.

‘’Although the perpetrators have apologised in their note, unfortunately they do not seem to realise the considerable repair costs of around £5k. The top fork section of the trident has come away from the staff and also Neptune will need a new arm as it was badly damaged during the removal.  A stonemason will then need to put it all back together again.

“We are hopeful of a repair being completed before the fountain switch-on in the spring. We will look into how we fix the trident back to negate any future attempt to remove it unlawfully.”