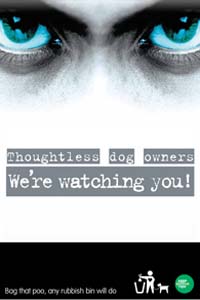 Cheltenham Borough Council has joined forces with environmental charity Keep Britain Tidy in a bid to reduce dog fouling in key problem areas of the town.

The ‘We’re watching you’ campaign, which initially launched in November is now being rolled out nationwide and Cheltenham Borough Council has signed up to be a part of it.

The campaign sets its sights on irresponsible dog owners, with recent research showing that dog walkers are more responsible, and pick up after their dogs, when they think that they are being watched.

Keep Britain Tidy recently conducted a social experiment, working with 20 land managers across the country, they saw an average reduction of 46% in the levels of dog fouling. Feedback suggested that dog fouling tends to occur at night time and during the winter months, as some dog owners feel that they can’t be seen ‘under the cover of darkness’.

Cheltenham Borough Council has signed up to the edgy and uncompromising poster campaign to tackle dog fouling hotspots. The ‘We’re watching you’ series are visible after dark and use innovative, cutting-edge materials. The social experiment was the first time such a material has been used on a poster.
Adam Reynolds, green space development manager, said: “Feedback from residents has told us that dog fouling is a key issue in King George V Playing Field, Springfield Park, Warden Hill and Sandford Park and they would like to see it addressed.

“The vast majority of dog owners are responsible people, who habitually pick up after their dog and dispose of the poo bags correctly, either in the nearest bin or by taking home to dispose of in their own household waste bin. However, we want to target those who don’t act so responsibly and we’re hoping this campaign will do just that.”

“The public protection team and two community park rangers have put the signs up and will be monitoring the success of the campaign.”

Councillor Chris Coleman, cabinet member for clean and green environment, added: “We are thrilled to be working with Keep Britain Tidy, and being a part of such a cutting edge campaign. We hope that we will see the same results as the other local authorities who took part in the trial.”

Keep Britain Tidy chief executive Phil Barton said: “We are delighted that Cheltenham Borough Council is joining with us for this campaign.

“Our research tells us that people see dog fouling as, by far, the most unacceptable and dirtiest type of litter.
“This campaign has been proven to make a difference and encourage the minority of dog owners who don’t pick up after their pets to do the right thing.”

Notes to editors:
Keep Britain Tidy is a leading environmental charity. We inspire people to be litter-free, to waste less and to live more. We are run programmes including Eco-Schools, the Green Flag Award for parks and green spaces and the Blue Flag/ Seaside Awards for beaches. To find out more about Keep Britain Tidy, our programmes and campaigns visit http://www.keepbritaintidy.org/.