Councillors roll up their sleeves at recycling centre 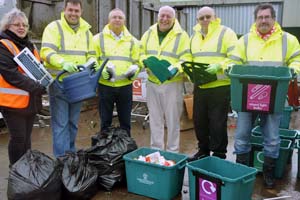 Councillors will be rolling up their sleeves and mucking in at the recycling centre over the coming weeks, as part of the council’s ‘thanks a million’ campaign.

They will be on hand to offer recycling advice to residents who may have otherwise been tempted to send things to landfill.

The campaign, running throughout February and March, sends out a reminder that recycling and composting by Cheltenham residents saves over £1million on landfill tax costs every year. The council wants to beat this figure and that’s why councillors are going to the Swindon Road recycling centre to show residents how they could do even more.

Councillor Chris Coleman, cabinet member for clean and green environment, said: "When we have a clear out, it’s always tempting to put everything into a bag and take it to the tip for landfill. The reality is that lots of items could be saved from disposal and recycled if people know what the alternatives are."

Councillors representing different parties will be joining staff members to ask residents as they arrive at the centre if they are willing to volunteer to take part. If they are happy to do so, staff members will open their bags and any recycling items which can be identified will be separated and recycled rather than being sent to landfill.

In addition to increasing the amount of recycling which is collected at the site, it is also envisaged that by raising awareness on what can be recycled, we can minimise the time people have to spend asking what to do with different items.

In one week, between Monday morning (2 February) at 7.30am and 4.30pm on Thursday (5 February), from the recycling that was collected at the depot and weighed, the council collected: 300kg of paper; 500kg of textiles, 220kg of hard plastics, 15kg of household batteries, and 10kg of light bulbs.

Councillor Coleman, continued: "This is not about policing bins. I am always amazed when I visit the recycling centre at the vast range of items which can be recycled.  It’s just about spreading the word and showing people that they can make a difference."