Businesses benefit from £1.1 million over 2 years 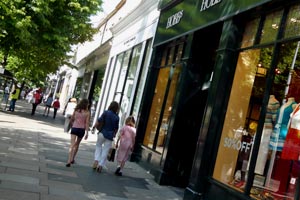 Cheltenham Borough Council has awarded almost £420,000 worth of business rates relief to about 500 businesses occupying retail premises in the financial year 2014/2015.

It is estimated that a further £650,000 will be awarded in 2015/2016 making a total of £1.1 million over 2 years.In line with government recommendations announced in the 2013 Autumn statement, the council currently awards business rate relief up to £1,000 to occupied retail properties with a rateable value of £50,000 or less. This will rise to £1,500 per property during 2015/16. The council has also awarded a further £5,000 worth of relief to businesses occupying retail premises which had been empty for more than a year.

The business rates team identifies businesses that might qualify and sends out the appropriate application form. All businesses currently receiving the £1,000 will automatically be awarded the £1,500 on their 2015/2016 bills when they are issued in March.

Councillor John Rawson, cabinet member for finance said: ‘’I am delighted that so many local businesses are benefiting from this scheme. It’s a government backed scheme which the council has made the most of by encouraging businesses to apply. Over a million pounds over two years is a big boost to the local economy.’’

Kevan Blackadder, Cheltenham’s business partnership manager added: "All initiatives that bring business rates relief to retailers in Cheltenham are to be welcomed. I would urge the council to continue to investigate all possible methods to help still further. It's also important that public bodies do all they can to ensure that all the businesses that are eligible are aware of the fact."

For more information about these reliefs businesses should contact the business rates helpline on 01242 264255.