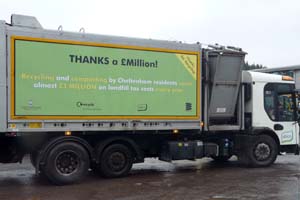 Refuse and recycling vehicles are being given a new look as part of the ‘thanks a million’ recycling campaign.

The new artwork on the vehicles will be thanking Borough residents for their part in saving over £1million on landfill tax costs every year as well as reminding residents not to waste their money by sending unnecessary refuse to landfill.

This forms part of a campaign, running throughout February and March, which thanks residents for already recycling 46% of household waste but also send out a reminder that every year we still pay £1.4m to bury waste. The council wants to promote recycling in the town as well as seeking to reduce the huge cost of sending waste to landfill.

The new artwork will be on 10 of the refuse and recycling trucks. Five refuse trucks will carry the 'Don't WASTE your money' artwork and five recycling vehicles will carry the 'THANKS a £Million'. With the average recycling round serving 740 properties per day Cheltenham residents are bound to spot them across Cheltenham.

Councillor Chris Coleman, cabinet member for clean and green environment, said: "This campaign is about recognising the vital role the people of Cheltenham play in doing their bit to help the environment. We want to thank them for what they do but as we are still paying £1.4m to bury waste each year we also want to increase awareness on the importance of recycling to try and get this figure down.

"The new vehicle artwork is a great way to spread our thanks and encourage more recycling".

To find out more about recycling in Cheltenham including your collection day, what you can recycle and where visit the council’s website.