A day in the life of a recycling crew 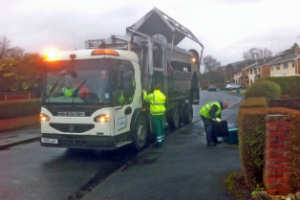 As part of the council’s ‘thanks a million’ campaign, we thought it would interesting to get to know one of the recycling crews and find out more about their day on one of Cheltenham’s busy rounds.

Let us introduce Matt Jones, Edward Palmer and Matt Wale, between them they have more than ten years’ on the job experience. Together they walk around ten miles per day when making collections with the average round serving approximately 740 properties.

The job entails very early mornings with the crew getting up at around 6am. They arrive at the depot at 6.45am to give themselves time to carry out safety checks on the recycling truck and pick up any recycling boxes which need to be delivered. They head out on their round at 7am and will be out as long as it takes to collect the recycling for that day. This varies from six hours to sometimes more than eight hours, it all depends on road works, traffic and how heavy the day is. It’s rare that any two days are ever the same.

So why do they do it?

They all agree the best part of the job is working outdoors, even if it is challenging in bad weather conditions, meeting people in the community and working in a team to get the job done. The hours also fit well around their home lives.

We asked them what they appreciate about the job and what they think we can do to increase recycling:

Matt Jones, waste and recycling operative, says: “The amount of recycling we are collecting is on the increase so we really appreciate residents taking the time to separate out their recycling, especially when they have lots of recycling boxes, as it makes our job much more simple and quick to do.”

Edward Palmer, driver, added: “By separating out the recycling it means the vehicles aren’t blocking the road for so long as we can be much quicker at sorting it into the various compartments.

“I think campaigns like ‘Thanks a million’ work well to highlight the message. It’s good that we’re delivering a positive message to residents for working so hard to help save over £1million on landfill tax costs every year.”

Matt Wale, waste and recycling operative, commented: “I also appreciate residents taking the time to separate out their paper, glass, card, cans and plastic bottles in their recycling boxes, especially when they have lots of them!

“To get residents to recycle more I think it’s important to ask them their views and thank them for participating.”

Councillor Chris Coleman, cabinet member for clean and green environment, said: “I’d like to thank the refuse and recycling crews for all their hard work. They really do a great job, and are always friendly and helpful. It’s important to hear their views on how we can help to increase recycling as they are collecting it day in day out and speaking to residents. It’s encouraging that they are seeing an increase and are supportive of the ‘Thanks a million’ campaign.”

To find out more about recycling in Cheltenham including your collection day, what you can recycle and where visit the council’s website.