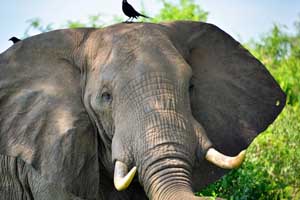 A pilot scheme to divert recyclables from landfill at Swindon Road household recycling centre has been hailed a success.

During the first two weeks of the month long trial, more than 5 tonnes of household waste was saved from landfill and recycled instead.

The weight of materials – which included amongst other things paper, textiles, plastics, card, cans, light bulbs and batteries – equates to that of an average African elephant.  Councillors have been doing their bit by sorting the items which residents have brought to the Swindon Road recycling centre to see what can be saved from landfill and recycled instead. It is hoped that this will raise awareness of the importance of segregating all recyclables before visiting the facility.

The initiative is part of Cheltenham Borough Council’s ‘thanks a million’ campaign, which sends out a reminder that recycling and composting by Cheltenham residents saves over £1million on landfill tax costs every year.

Councillor Chris Coleman, cabinet member for clean and green environment said: ‘’I expected the scheme to have a positive impact as it’s always tempting to throw things out without giving it a second thought. The results in the first two weeks however have been incredible. We have filled recycling skips full of items which would otherwise have gone to landfill. We have also been able to take the time to talk to residents as they arrive at the recycling centre and offer advice about the vast range of items that can so easily be recycled.   I’d like to thank our residents, who have been happy to listen to the advice and take it on board and also the staff at the household recycling centre who have worked hard to make the trial a success.’’

The exercise will now be extended to continue throughout March, making a huge environmental impact and saving even more money on landfill tax costs.

Please note that the weights displayed are in KGs:


The ‘not weighed’ tonnage is a roll over and the material contained in the skip isn’t of the quantity to qualify for emptying and therefore it hasn’t been emptied nor weighed when doing so. The contents in each category will be emptied and weighed at the end of week 4. The council will report on these figures.