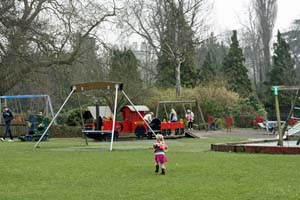 Cheltenham Borough Council has big plans in store for its most popular play area at Pittville Park and is asking businesses if they would like to support them with their vision.

The council wants to make the play area an outstanding one for children of all ages and abilities to enjoy and has committed to spending around £300k to the project. In order to deliver their goal the council is asking businesses, both local and national, if they would like to get involved to support the venture.

The project is in its early stages and it is hoped it will be completed during 2016. A public survey has been completed with over 300 responses received, which shows how important this play area is to a lot of people. Currently the project is going through a tender exercise to select a design that reflects the ambition we have for the play area and includes results from the questionnaire, along with many other great suggestions.  At this stage potential contractors will be conducting site visits to survey the play area. Posters have been put up around the area informing park users of this.

Adam Reynolds, green space development manager, says: “We want to create an outstanding play area that is accessible to children of all ages and abilities. This is a major undertaking but it’s important we invest in our green spaces and play areas to ensure they provide an exciting enjoyable experience and support healthy lifestyles.”

Cllr Chris Coleman, cabinet member for clean and green, continues: “Residents from across the borough, county and beyond use this park so we want to ensure we get it right. We are committing over £300k to this project but in order to make this a flagship scheme we’d like to spend £500k. We’re asking businesses to support this fantastic project.”

Notes:
About Pittville Park: Opened in 1825, Pittville Park is the largest ornamental park in Cheltenham and features the magnificent Pump Room and lakes. This park is given a Grade 2 listing under the English Heritage register of historic parks and gardens, with the Pump Room as a Grade 1 historic building.

Pittville Park is divided in two by Evesham Road. Most people are familiar with the eastern side of the park, which is overlooked by Pittville Pump Room, and home to the main children's play area and the aviaries where you'll find our popular birds and bunnies. However, to the west of Evesham Road lies the much larger western park with its more natural layout and small areas of woodland. Here you will find the larger 'lower lake' where you can fish during the fishing season, and there is a smaller children's play area along with tennis courts, a pitch and putt golf course and a skate park.

Toilets can be found in the eastern park between the lake and Evesham Road, and refreshments can be bought at Central Cross Cafe which is in the southern section alongside Central Cross Drive and also at the Boathouse near the tennis courts.

Location
Pittville Park is to the north of the town and straddles Evesham Road. The park borders Tommy Taylor's Lane to the west and Pittville Lawn to the east and the narrow southern section of the park stretches as far south as Wellington Road.