Cheltenham’s parks amongst the best in the country 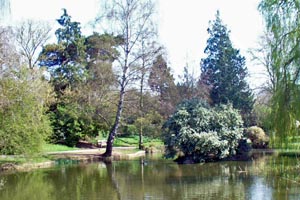 Montpellier Gardens, Hatherley Park, Naunton Park and Springfields Park are amongst the best in the country – and that’s official.

All four parks have retained their Green Flag status which shows to visitors that they are well maintained and well managed, with excellent facilities.

The judging took place in June and the results were announced on 23 July. To achieve the status of a Green Flag, the judges score each park under key areas which include: a welcoming place; clean and well maintained; sustainability; conservation and heritage; and community involvement.

On top of this Hatherley Park was also nominated for the Bees Needs ‘Champion of Champions’ Awards. These awards form part of the Green Flag awards for 2015 for recognition of efforts to help save the endangered bee population. This is the first time Hatherely Park has been nominated for this award with 25 other organisations also nominated.

Janice Peacey, community ranger, said: “We are absolutely thrilled to retain our green flag award for the four parks and gardens from Keep Britain Tidy. We’re delighted that our residents are able to benefit from green space of the very highest quality. We’re also pleased that Hatherley Park was nominated for the Bees Needs ‘Champion of Champions’ Awards. Although we did not win this time it is still great to be nominated along with the 25 other organisations.”

Councillor Chris Coleman, cabinet member for clean and green environment, added: “This award represents the hard work and dedication of council staff, volunteers, community groups and local residents. These parks are fantastic places to enjoy and I’m very pleased that we have retained the Green Flag status for them.”

For more information on the Green Flag Awards visit their website.

Notes to Editors:
Green Flag Award recognises well managed, high quality green spaces. Any green space is eligible to win this award providing visitors can enter free of charge. Previous winners include parks managed by local authorities as well as those run by community groups and trusts. The scheme was set up in 1996.

Green Flag’s vision is that by 2020, 50 per cent of green spaces in England and Wales will be of Green Flag standard – a staggering 15,000 sites.