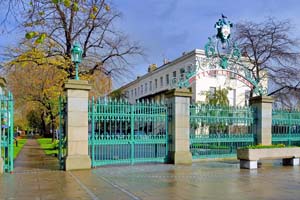 Historic England (formerly English Heritage) has awarded a commendation in the Angel Awards to the Friends of Pittville for the project to restore Pittville Gates.

The gates have been successfully rescued due to the tremendous time, effort and determination of the Friends.

The Pittville Gates restoration project took two years. In the first phase, the six stone pillars were replaced and the surviving ironwork restored, together with the landscaping of the surroundings and the reinstatement of the railings along Prestbury Road. The second phase saw the installation of the six opening gates and a new lamp in the central overthrow.

The original gates were removed in 1921 to avoid damage to vehicles passing through the gateway, and the original lamp disappeared sometime in the 1960s. The new gates were cast using patterns made from the surviving central screen and posts, and the lamp, based on late nineteenth century designs, was made by hand.

The project was a partnership between Cheltenham Borough Council and Friends of Pittville. The Friends raised the funds required, nearly £290,000, mainly through grants from the Gloucestershire Environmental Trust/Cory Environmental, the Heritage Lottery Fund, the Summerfield Charitable trust, the Cheltenham Borough Council Environmental Fund, Gloucestershire County Council and donations from other charitable trusts and many generous individuals.

Karen Radford, conservation and heritage manager, said: “The gates have transformed the appearance of a prominent corner of the townscape. I really would like to congratulate the Friends of Pittville for being commended in the Angel Awards. It recognises the hard work and effort they have put into this restoration project.”

Judie Hodsdon, Friends of Pittville, added: “We are so pleased to receive this commendation which recognises the hard work put in by so many people to rescue one of Cheltenham’s landmarks.”
For more information about the project visit the Friends of Pittville website.