Names to be added to Cheltenham War Memorial 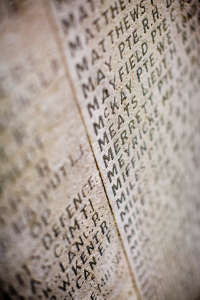 Six names will be added to Cheltenham War Memorial as part of the restoration, which started last month.

Volunteer experts in local history have carried out extensive research to identify people whose names were, due to error or lack of information at the time, omitted from the war memorial.

Six people have been identified, who fit the criteria of being born, or living in Cheltenham  (under its present day boundary) at the time they joined up; who died in active service, or of wounds or illness before 31st August 1921, and are not on any other UK memorial.

The names to be added are:

Private Richard Fox, 8891, 2nd Battalion Royal Welsh Regiment.   Born and bred in Cheltenham until enlisted into Regular Army in 1905.   Died of wounds near Ypres, Belgium on 30th November 1917 and buried in the Vlamertinghe New Military Cemetery.

Private Leonard (born Francis Leonard) Ivin, 9766, 11th Battalion Lancashire Fusiliers.   Born in Cheltenham 1896 but had moved to Manchester by 1911.   Killed in action Ovillers on the Somme, France, 9th July 1916.  Body never recovered from battlefield.   Officially listed on the Thiepval Memorial To The Missing.

Relatives of Cox, Fox and Ivin have confirmed that they are happy for the names to be added, but no close relatives have been traced for Baker, Belcher or Roberts. The names will be added unless relatives contact the council within the next 2 weeks.

Councillor Rowena Hay, cabinet member for property and finance said: ‘’War memorials remain a focal point for the community to remember and honour our brave service men and women.

‘’It’s important that all those who served are in our thoughts and remembered by future generations, so it seems appropriate that any names omitted are added on to the memorial as part of its restoration.’’

If anyone has any information about these names, they can contact Helen Down, the council’s team leader for participation and engagement:  helen.down@cheltenham.gov.uk, 01242 774960.