Let us know where urban gull nests are 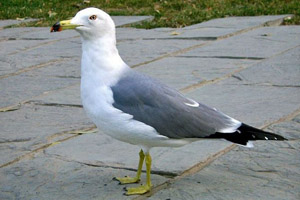 Cheltenham Borough Council will be carrying out an urban gull egg replacement programme in May this year and are asking residents to inform them of where the gull nests are so they can be included.

The egg replacement programme involves accessing rooftops where possible via a cherry picker, to remove gull eggs from their nests and replacing them with dummy eggs.

Gulls will continue to sit on the eggs, usually until the end of the breeding season, which means that the population does not grow and that the noise they make is lessened since they are not supporting young.

Urban gulls cause nuisance to residents and businesses in parts of Cheltenham during the Spring and Summer, because they are noisy, messy and can be aggressive. Gulls have been increasingly attracted to inland areas for the safe breeding grounds and steady food supply.

Residents are asked to report gull nests to the council so that these addresses can be included where possible in the programme. Alternatively, if residents can reach the nest safely, they can swap the eggs for dummy eggs themselves or remove the nest. Removing the nest will need to be repeated regularly, but will eventually deter the birds. There is also anecdotal evidence that gulls will not nest on red surfaces.

Residents can also help by everyone doing their bit to reduce the food supply to the gulls.  This means using the weekly food waste collection scheme, so that food isn’t in general waste and doesn’t end up at land fill sites, which are a primary food source for the gulls.  Making sure there is not food waste on the streets and not feeding the gulls will also help.

Duncan Turner, community protection officer, said: “We are repeating the dummy egg replacement programme this year as last year it appeared to have some effect in controlling the gull population. Residents have reported that the gulls were quieter than in previous years. If gulls are repeatedly unsuccessful at a breeding site, they will often move on.”

Residents are asked to report gull nests to the council on 01242 264135 or by emailing ehbusinesssupport@cheltenham.gov.uk so that these addresses can be included where possible in the programme.

The council also co-ordinates an Urban Gulls Focus Group, which is open to interested residents. The next meeting will be held on Tuesday 26 April, 5.30pm at the council offices.  If you would like to attend, please contact Helen Down on 01242 774960.