The zip wire is 'awesome' and the climbing frame 'epic' 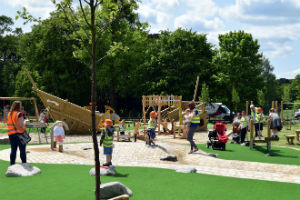 Pittville park – which now hosts Cheltenham’s biggest and newest play area – has welcomed thousands of visitors in the past few weeks.

Since the play area officially threw open its gates on 27 May, families have been coming from far and wide to have a go on the state of the art equipment.

The sand and water play, zip wires and trampolines seem to be the biggest hit with children, after the council gathered feedback on the opening day.  Many families are pleased that the play area is accessible as much of the equipment can be enjoyed by children of all abilities, including the roundabout and swings.   The sensory touch and musical areas are also popular.

One parent said: ‘’The new play area is fantastic; it’s so well thought out and beautifully constructed.’’

One of the children when asked about their favourite feature said:  ‘’The zip wire is awesome and the climbing frame is epic!’’

The new refreshment kiosk is also proving popular with families, where local ice cream, homemade cakes, teas and coffees can be purchased. The surrounding picnic benches are regularly appreciated by those needing a little rest.

The aviaries are receiving finishing touches and will be open once again in the next couple of weeks for people to enjoy the birds and bunnies.

Councillor Chris Coleman, cabinet member for clean and green environment said:  ‘’I am so pleased and overwhelmed with all of the feedback we have received since opening. The play area is now even more popular than before and not only are residents coming in their thousands, but visitors are also travelling from other areas to come and see our beautiful park.   I am proud of the work we have done and thanks goes to Friends of Pittville for their fundraising campaign.  I’d like to thank everyone who has worked with us from the very early design stages, right through to the opening; look what we’ve achieved.

‘’We have had some concerns raised about littering and we have ensured that the daily litter collections and general maintenance work is carried out even earlier in the morning ready for the day ahead. As this is a public space, free to be enjoyed by everyone we are reluctant to take steps such as locking the play area. I would ask those using the park to respect it and take any rubbish away with them, or use the bins provided, so that we can continue to be proud of one of Cheltenham’s best assets.’’

The Gloucestershire police local neighbourhood patrol team have increased their patrols in the area and residents are reminded that they can call the non-emergency number 101 to report any vandalism or anti-social behaviour, or call 999 in an emergency.

The play equipment which was removed from Pittville will be installed in other play areas across Cheltenham, including Beeches playing field, King George V playing field, Benhall open space and Pittville Boat House.

An official ribbon cutting event will be held next month, with children’s entertainment on offer. More details to follow.